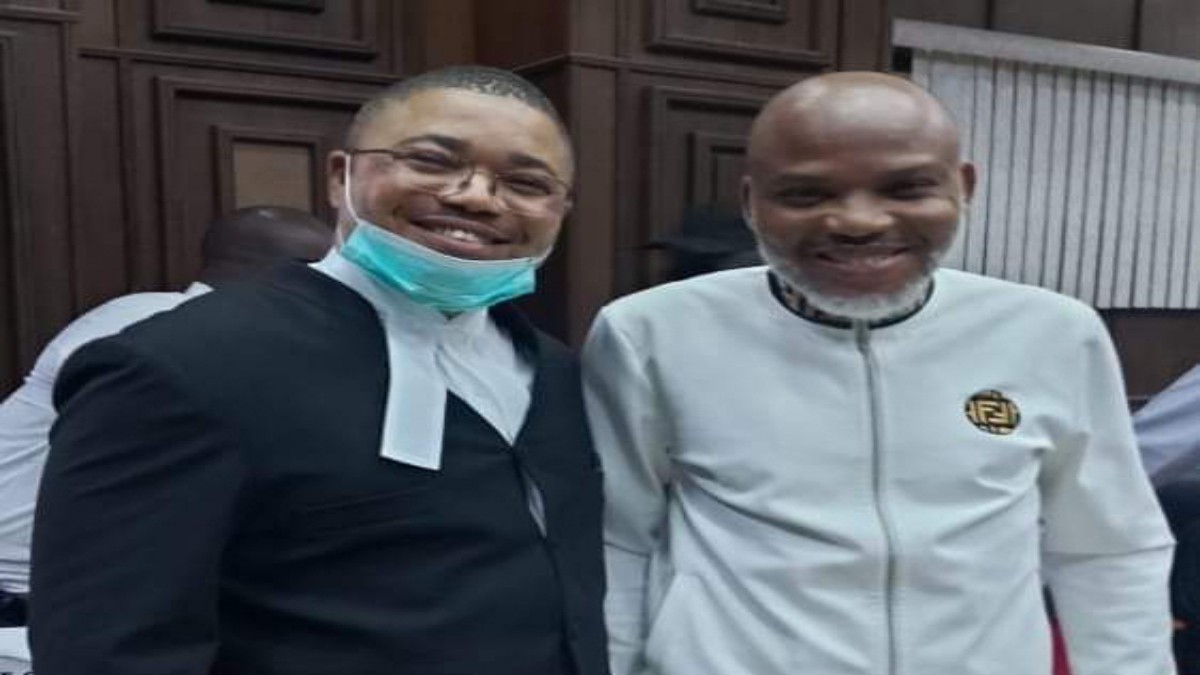 Is nnamdi Kanu still alive? Why hasn’t he been allowed to see his lawyers? These have been some of the questions ringing in the hearts of people, especial people who have a soft sport for the detained leader of the indigenous people of Biafra (IPOB).

Few weeks back, the brother of Nnamdi Kanu had alleged that he was denied access to Nnamdi Kanu when he came to visit. More so, there were other reports that suggested that the detained Leader was I’ll and needed medical help. Recall that earth sound reports had reported that one of the lawyers to Mazi had raised alarm, when he alleged that his client was sick and needed urgent medical care.

In another report, Barr Ifeanyi Ejiofor had asked the public to “HOLD DSS RESPONSIBLE” if anything happens to Nnamdi Kanu.

However, his lawyer Barr. Ifeanyi Ejiofor has clarified that Mazi Nnamdi Kanu, the detained leader of the Indigenous People of Biafra, IPOB, is still alive and detained at the Department of State Services, DSS facility.

“Nnamdi Kanu is Not Dead, He is very much alive” – Barr Ifeanyi Ejiofor

In a statement posted on his official Facebook page, Ejiofor provided an update on his legal team’s routine visit to Kanu at the DSS headquarters in Abuja.

According to him, the IPOB leader refused to leave his detention cell in protest of the DSS’s refusal to allow him to see his lawyers on three occasions.

He stated that efforts were being “intensified” to persuade Kanu to meet with his legal team, led by human rights lawyer Chief Mike Ozekhome, SAN.

See Also “I have Been Denied Access To See Mazi Nnamdi Kanu”- Brother cries out.

The statement, read: “Our routine court-ordered visit to our indefatigable Client was led by the distinguished Senior Advocate of Nigeria, Prof. Chief Mike Ozekhome, SAN, who is also the Lead Counsel in Onyendu Mazi Nnamdi Kanu’s case.

“Our esteemed team of Lawyers comprising of the Learned Silk, myself and Bar. Aloy Ejimakor, were all cleared most promptly upon our arrival, and consequently allowed to proceed with the business of the day- to pay Nnamdi Kanu a visit as his lawyers.

We were immediately ushered into the room designated for the visit. All the protocols were duly observed, as we willingly submitted ourselves to same, in line with the DSS stipulated routine guidelines. We waited until minutes turned into an hour, and there was no signal that we would have Onyendu brought to us.

Consequently, the erudite Silk leading our team raised alarm and demanded to have the attention of the DSS superiors for explanation on why a court-ordered visit which, ordinarily, should not extend beyond two hours was taking almost one and half hour waiting time, with no hope of meeting with Onyendu.

Following the stout protest by the erudite Silk, we were consequently brought in, to meet with some superior officers at a meeting where all superior personnel connected with the matter were invited.Far-reaching contacts were made to establish the fact that our Client- Onyendu Mazi Nnamdi Kanu was presumably protesting the previous three visits which were aborted by the DSS.

All efforts made to move the visit to his very location of detention were not granted by the DSS, as they insisted that our request ran contrary to their procedure and guidelines.

Effort is presently being intensified to pacify Onyendu to have one-on-one discussion with his legal team, to enable us brief him on legal steps we may be compelled to take and measures to be adopted to assure him that there are legal consequences for flagrant violations of court orders by the DSS.

We are quite hopeful that this needless impasse will be resolved between now and tomorrow morning,to enable the legal team led by Chief Ozekhome, SAN, to conduct the visit tomorrow. That has so far been assured us.

We can authoritatively confirm to you all at this stage that ONYENDU MAZI NNAMDI KANU is very much alive, and still being detained in the facility of the State Security Services (DSS) National Headquarters, Abuja.

We shall continue to keep you updated on matters connected with this visit to our indefatigable Client- Onyendu Mazi Nnamdi Kanu, and any other compelling attendant concerns thereto.

Thank you all, UMUCHINEKE and remain richly blessed.

“How many of you have sent your private jets to evacuate Nigerians from Ukraine?” Ben Bruce tackles rich Nigerian Billionaires .