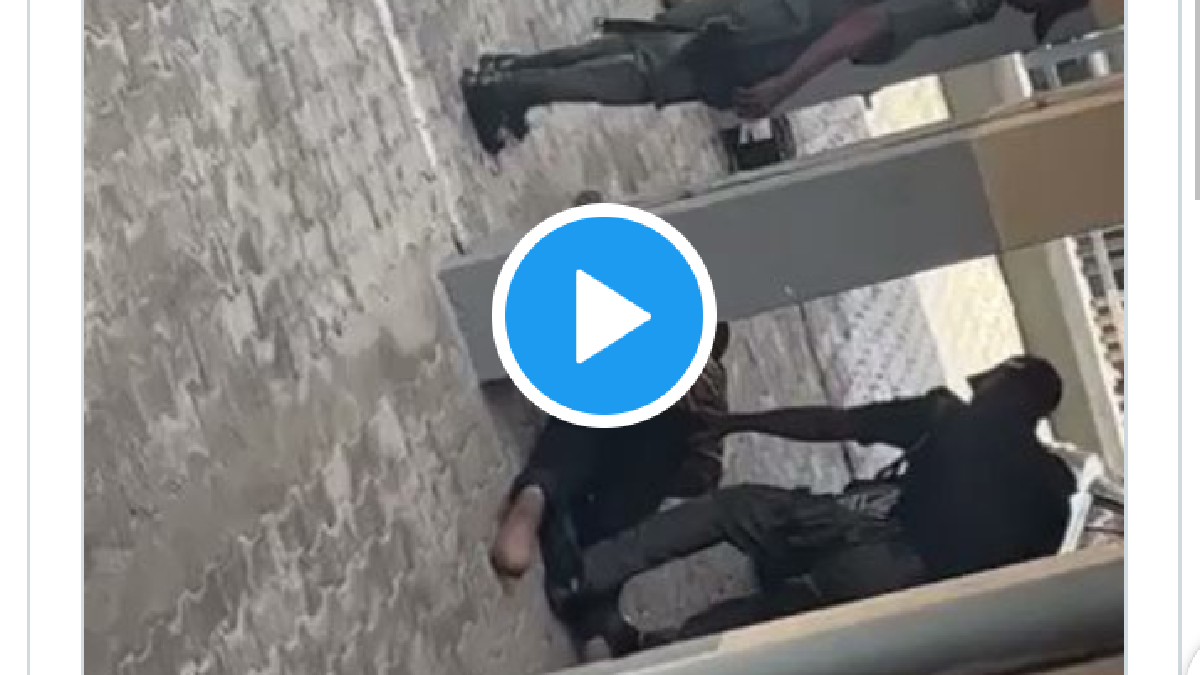 Kuda Bank has responded to the viral video of armed police officers dragging a customer out of its office.

The video, which was shared on Twitter, depicted a Kuda client being dragged while lying flat on the floor, and it has since sparked outrage among Nigerians.

The bank responded today in a statement that revealed the details of what happened at its office, which resulted in policemen dragging the customer in the now-viral video.

According to questtimes, AbdulGafar was allegedly abused by police officers on the premises of Kuda, and at one point, he was on the floor with one of the officers assaulting and dragging his trouser.

According to a tweeter user @Ayam_Jamotech who identified himself as the brother of the victim,

“So my brother went to ‪@kudabankhelp‬ office today at yaba to know the reason why his account was locked and yet not to be opened after dropping his proof to them that it’s a legit money and not fraud money at all. So funny how when he got there this morning. They sent their mopol.

“Imagine a whole bank you trusted with your hard earned money working with EFCC and NG police just to drain your account cause you’re making big income.

‪@kudabank‬ everybody needs to boycott this rubbish bank now!! You need to say something ASAP!! I’m suing you.

“My lil brother transferred his own money N577,491 from his Moniepoint POS to his own Kuda account on Apr13 2021 but you guys choose to be unfortunate to lock up his account for someone that has sent a huge amount of over 10m at once without you guys locking it.

“So why the sudden lock for just an amount lesser than a 10M naira? You locked his total amount of 1.2 million naira without even feeling remorseful or thinking how this person would be thinking after locking his account. Please kindly open back his account cause the money is for his business and he need it to continue his daily activities.

“You can do whatever investigations but I’m gladly telling you that’s not a fraud money and we need you guys to open his account so he can continue with his business thank you,” he said

While Everyone blames Kuda bank for “Conniving with the Police to maltreat their customer,” it appears Kuda bank was actually the “good guy” here.

In a mail received by our source who is a Kuda bank customer, Kuda bank explained that they had no hands in the maltreatment of the victim.

In fact, kuda bank said they actually facilitated the release of the victim to his parents after he was arrested and taken to the criminal investigation department of the Lagos state Police Command.

Kuda bank also expressed displeasure with how the young man was treated especially seeing that he wasn’t armed.

“You probably already know that we were in the news this week. This is a factual account of the incident that led us here and a clarification of our responsibility toward you as your bank:

“On Tuesday, April 19, one of our customers, Abdulqudus, visited our customer service centre at Commercial Avenue, Yaba to speak to us about his account which we had previously restricted temporarily based on an instruction from the police.“

“We had been in constant communication with Abdulqudus by email from the day we restricted his account till he visited us on Tuesday, April 19.“

“According to the police, they had received a complaint from a third party that stolen money had been transferred to Abdulqudus’ account, a transaction that was confirmed during the investigation.“

“The police also instructed us to let them know if Abdulqudus showed up at our customer service centre, which we did when he visited us on Tuesday.“

“When the police arrived at our service centre, they attempted to arrest Abdulqudus, restraining him in the parking lot of the service centre.“

“From our service centre, Abdulqudus ended up at the State Criminal Investigation Department, where he was questioned.“

“Without interfering with the police investigation, members of the Kuda team assisted in securing Abdulqudus’ release into his father’s custody the day after his arrest. His father also offered to pay back the stolen money to the complainant who filed a report to the police.“

We have spoken at length with Abdulqudus and his family since his release.

“Our role in this incident began with obeying the instructions of the police.“

“We’re disappointed at the use of unnecessary force in arresting Abdulqudus, an unarmed person, irrespective of his reaction during the time of the arrest, and we are currently in conversation with the police force to agree on what is acceptable behaviour when dealing with our customers.“

“Our customers do not deserve to be mistreated by law enforcement!“

“We’re not an unreasonable organisation, so anyone who uses their Kuda account for legitimate personal or business transactions can rest assured that we’re looking out for them.“

“As much as we must not break the law, we must also protect your interests and we will continue to do so. This is our mission.“