NIN Registration; Easy ways to Link Your NIN to All your SIM Cards in 2022.
Advertisement 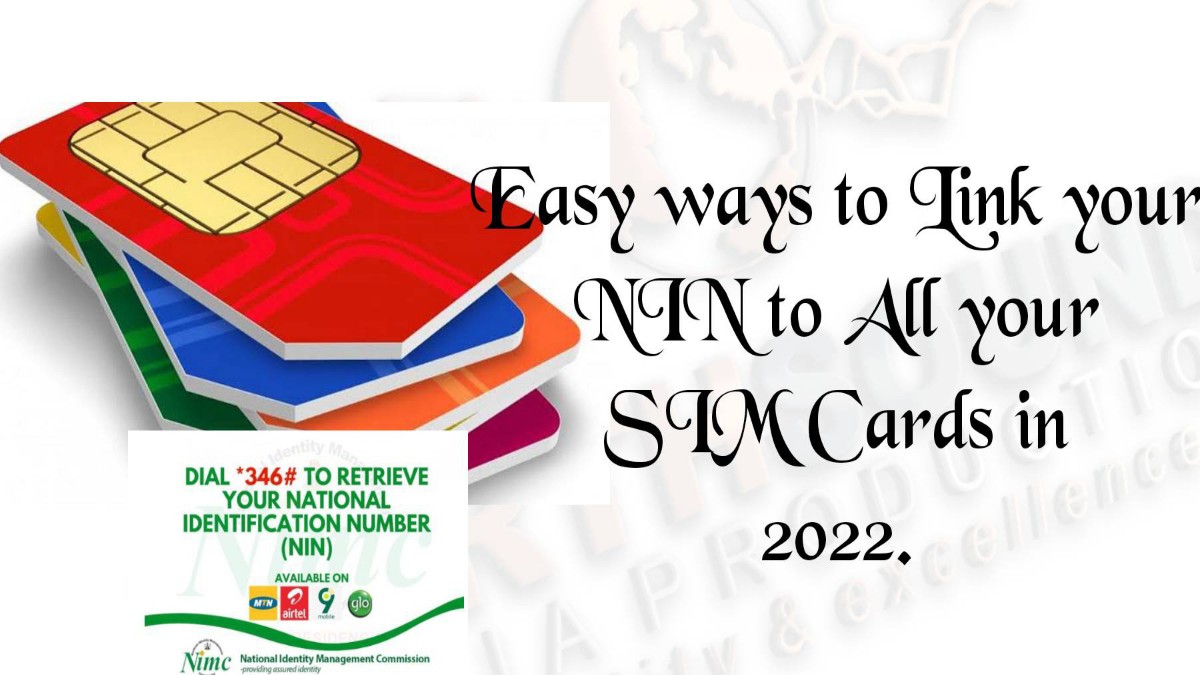 NIN registration has probably come to stay in Nigeria. It is no longer news that the federal government has decided to deactivate SIM cards that do not have NIN numbers associated with them.

On the April 4th of April 2022, the federal government ordered telecommunications companies to block calls from phone numbers that had not yet been linked to their National Identity Numbers (NIN).

Subscribers who had not yet linked their phone numbers to their NINs would be unable to make calls until the link was completed.

What does NIN stand for?

The number is issued by the National Identity Management Commission NIMC.

The National Identification Number (NIN) is made up of 11 non-intelligible numbers that are selected at random and assigned to an individual upon completion of enrolment in the National Identity Database (NIDB).

Once assigned to a person, a NIN can never be reassigned, given, or used by another person, making it unique in nature.

When an individual dies, his or her NIN is retired once a death certificate is presented to the Commission and the individual’s death is established.

The NIN is used to link all records about an individual in the database and to establish or verify his or her identity.

All Nigerian citizens and legal residents aged zero (birth) and up are eligible to apply for NINs.

How do I get my NIN number?

To obtain your NIN number as a Nigerian citizen or resident, you must go to the National Identity Management Commissioner’s office nearest to you in order to get registered.

However, if you previously registered and obtained a NIN but misplaced your NIN, or have forgotten where you kept your NIN slip, Not to worry, NIMC’s USSD service allows you to easily retrieve your NIN using your mobile phone.

To use this service, simply follow the steps below:

Please keep in mind that the USSD code *346# serves as the universal NIN retrieval code for all networks. If you are unable to retrieve your NIN using this method outlined above, you should read further to find other methods.

How can I get my Nigeria NIN number from abroad?

This service is being rendered by third party companies with the approval of NIMC, as a result, some charges may apply.

See Also Who Wants to Be a Millionaire?

How to link nin to mtn?

From the mtn phone number you want to link, dial *785#Your NIN#. The number will be automatically linked to your NIN.

MTN customers who haven’t enrolled for NIN at all can click here to get enrolled and also get the number linked to their men lines.

How to link nin to airtel

There are several options available to airtel users who want to link their NIN to their airtel Lines.

How to link NIN to Airtel using the USSD method.

*121*1# is the USSD code for connecting NIN to Airtel, and it is only valid for Airtel lines. Simply follow the steps below to link your NIN if you already have one.

To link your National Identification Number (NIN) to Airtel, dial *121*1#. After that, you’ll be automatically redirected to the portal to enter your NIN, which you should do immediately to complete registration.

How to link NIN to Airtel through the airtel website.

Customers of the RED Network have an opportunity to link their NIN to their airtel sim cards through their website.

To do that, click here.
Then enter your Airtel number, whether it’s a mobile number, a MiFi, a router, or an ODU.
Then click Proceed, and finally confirm the OTP code.

How to link NIN to Airtel through their android App

It is also possible to link NIN to Airtel Lines through their android App.

To do that, simply head to play store and download the Airtel App. Once done, open the app and locate SETTINGS. Then follow the instructions to complete the Linkage.

Watch this video below for further explanations.

How to Link NIN to 9mobile

9mobile customers who intend to link their NIN number to their 9mobile numbers have a couple options they can take advantage of.

How to Link NIN to 9mobile through USSD code.

They USSD code for linking NIN to 9mobile numbers is *200*8# and it only works with 9moblie lines. Simply follow the steps below to link your NIN if you already have one.

How to Link NIN to 9mobile through the 9mobile website

9mobile has an online platform through which their customers can link their NIN to their 9mobile lines. To take advantage of this as a 9mobile customer,

How do I get my NIN number?

How can I check my NIN online?

What NIN stand for?

How do I link MTN to NIN?

How can I check my NIN online?

I want to Serve as your Next President” – Rotimi Amaechi.