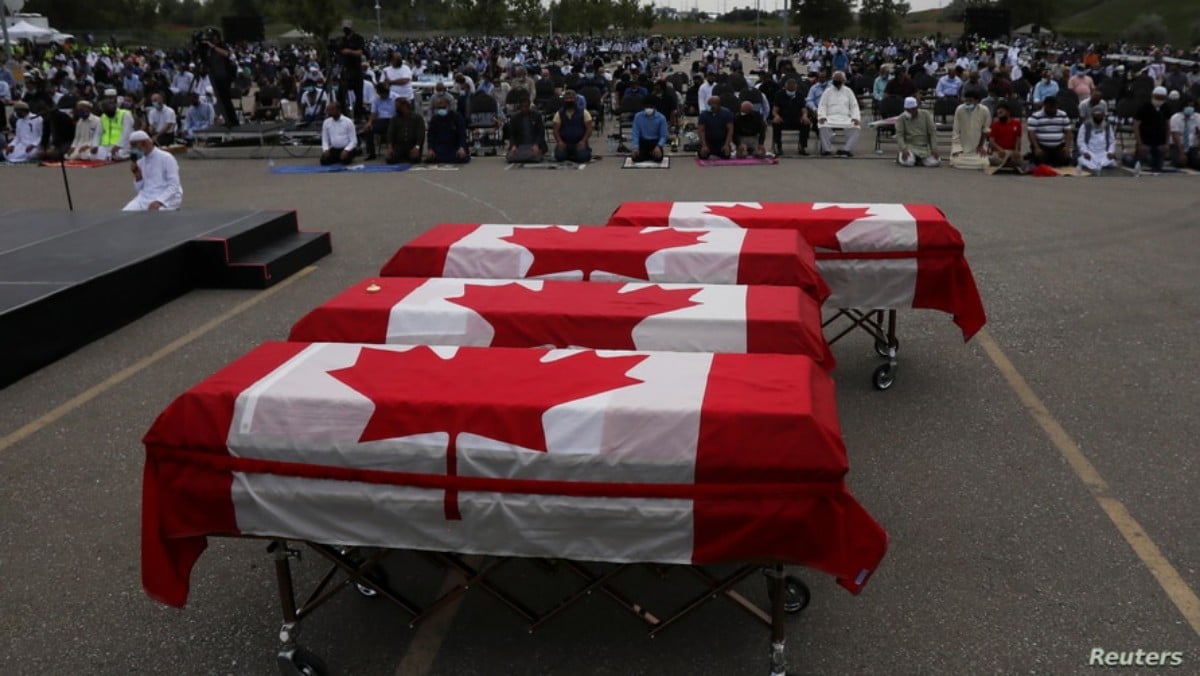 London’s Muslim community, which numbers about 30,000, is mourning the loss of a family that came to Canada in 2007 when Yumna was a baby in search of a better life. Madiha became an accomplished academic working toward a PhD in environmental engineering, while Salman was a physiotherapist who provided care for seniors. Yumna was an honour-roll Grade 9 student who painted a mural at her school that called on her classmates to “shoot for the moon.”

The killings have raised concerns about Islamophobia in Canada and highlighted fears among Muslims that simply showing their faith in public could make them targets.

Canadian flags draped the caskets of four members of a Muslim family who were mourned at a funeral Saturday in London, Ont., almost a week after they died in what police have said was a hate-motivated attack.

Madiha Salman, 44, her husband Salman Afzaal, 46, their 15-year-old daughter Yumna Afzaal and Salman’s 74-year-old mother Talat Afzaal died after they were run down by a pickup truck on June 6 while on one of their regular evening walks. The lone survivor is nine-year old Fayez. Other family members arrived in London from as far away as Pakistan and Australia to support him.

Police have said the attack was premeditated and believe the family was targeted because of their faith. A 20-year-old man faces four counts of first-degree murder and one count of attempted murder.

Saturday’s funeral was held at the Islamic Centre of Southwest Ontario, with the public portion of the funeral getting underway just after 2 p.m. ET.

The funeral was held in the centre’s parking lot, with space for the public in nearby soccer fields.

Madiha Salman’s uncle was among those who spoke at the service, telling those in attendance that the outpouring of support from friends and strangers alike has helped him feel less alone in his grief.

He says the messages of comfort he and other relatives have received over the last week have marked “a first step towards finding a way to heal” as they grapple with sleepless nights and survivor’s guilt.

Pakistan’s ambassador to Canada also spoke at the service, saying all of Pakistan stands “shoulder to shoulder” with those who lost their loved ones.

“Our hearts are bleeding because of the atrocity that has befallen this wonderful, marvellous family,” he said.

A private burial was to follow the public portion of the ceremony.

“I think we’re emotionally exhausted,” Aarij Anwer said. “We are grateful for everything that has happened since that horrific tragedy. We’re looking forward to having some closure on Saturday.”

“Bayelsa has no grazing routes because the people are fishermen.”- Gov. Douye Diri