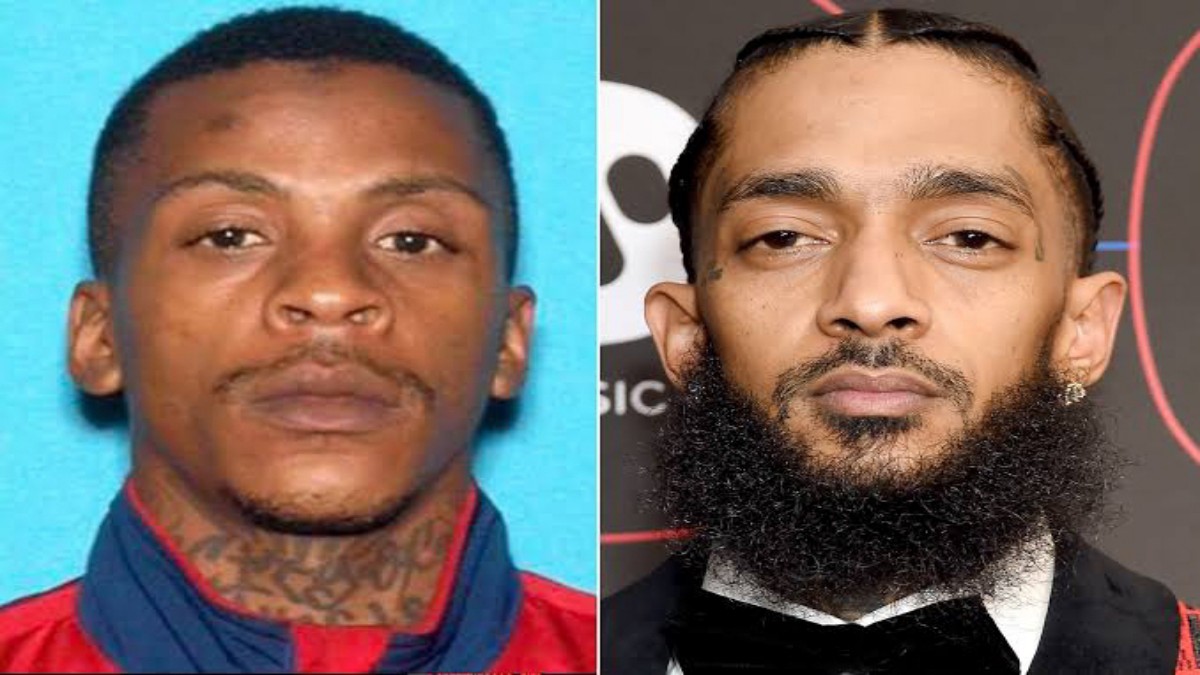 Eric Holder Jr., the man convicted of first-degree murder in the shooting death of Grammy-nominated rapper Nipsey Hussle, has been sentenced to life in prison.

In March 2019, Hussle, born Ermias Asghedom, was fatally shot outside of his Los Angeles clothing store. He was 33.

A jury of nine women and three men decided on Wednesday, July 6, that Eric Ronald Holder Jr. acted with premeditation when he opened fire on the musician with a black semiautomatic in one hand and a silver revolver in the other during an afternoon ambush in a strip mall parking lot.

According to the Associated Press, Deputy District Attorney John McKinney stated that Holder knew he was going to kill Hussle and that Holder shot Hussle at least ten times and kicked him in the head before fleeing.

McKinney stated that the two had a disagreement. According to the Associated Press, Hussle had heard Holder was a snitch and wanted to “clear that up.”

According to the deputy district attorney, the two, along with two of Hussle’s friends, had a “cool conversation” with Holder prior to the attack, noting that Hussle didn’t have any security with him when he visited his store.

Nipsey Hussle’s Murder, How the trial went on the Last days

After a day’s delay due to an assault on the defendant by fellow inmates, both sides rested their cases in the trial of a man charged with the murder of rapper Nipsey Hussle on Wednesday.

Holder arrived in court with swollen eyes and staples in the back of his head.

Two inmates punched him and cut him with a razor while he was waiting in a holding cell to appear in court on Tuesday, according to his attorney, Aaron Jansen.

The motive for the attack was unknown, and it was not discussed in court.

Holder did not testify during his trial.

Jansen called two witnesses for the defense, including a private investigator and gang expert, who testified about the gravity of the “snitching” allegations, which the prosecution claims were the motivation for the shooting.

“As you grow up in the neighborhood, everybody knows the consequences of what it means to be labeled a snitch,” the investigator, Robert Freeman, said.

Hussle and Holder grew up in the same South Los Angeles neighborhood and were both members of the Rollin’ 60s gang.

Jansen asked, without naming Hussle, whether discussions of acting as an informant are taken seriously when they come from a revered figure in the group.

“If they’re an OG or looked upon, whatever they say is almost gold in the streets,” Freeman answered.

Previous witnesses testified that on March 31, 2019, outside Hussle’s clothing store The Marathon, Hussle told Holder that there were rumors of “paperwork” indicating he’d been informing authorities, and that Holder needed to address it. Holder returned about 10 minutes later and shot Hussle, according to witnesses and the prosecution.

Deputy District Attorney John McKinney persuaded Freeman during his cross-examination that such conversations are not uncommon, and that while beatings over them are common, killings over them are extremely rare.

“That kind of admonition is common in the hood among homies, among friends, is that correct?” McKinney asked.

“It’s not uncommon for someone to hear about it, and then address it. It happens all the time, right?”

“That person can do everything from deny it to get a piece of paper to say it didn’t happen,” McKinney said, and Freeman agreed.

The issue of “snitching” has hung over the entire case, not only as the alleged motive but in the reluctance to testify of prosecution witnesses, one of whom, Hussle’s friend and shooting eyewitness Evan “Rimpau” MacKenzie, failed to appear despite a subpoena and a bench warrant.

McKinney had rested the prosecution’s case earlier Wednesday, the eighth day of testimony though the first in nearly a week after a pair of planned days off and the delay over Holder’s assault, which was first reported by Rolling Stone.

In the face of overwhelming evidence, including eyewitnesses who knew both Hussle and Holder, surveillance photos and video, and testimony from the woman who served as his unwitting getaway driver, Jansen admitted in his opening statement that Holder was the shooter, but claimed that mitigating circumstances, such as a lack of premeditation, mean he is not guilty of first-degree murder.

Hussle, whose legal name was Ermias Asghedom, had just released his major-label debut after years of underground acclaim and had been nominated for his first Grammy Award when he was killed at age 33.

On Monday (June 20), one of the two men who were injured when rapper Nipsey Hussle was gunned down in Los Angeles on March 31, 2019, testified in court about the incident. Shermi Villanueva, a witness, testified that he heard the beloved Los Angeles rapper’s final words.

“’He shot me. He shot me,’” Villanueva said of Hussle’s last words. “I heard it, and then I saw Nipsey fall. When I looked and see Nipsey, I started to run.”

Furthermore, Villanueva testified that he didn’t hear Holder say anything before shooting Hussle, contradicting Holder’s defense of acting in the “heat of the moment.” It also supports the prosecution’s theory that the shooting was planned.

Furthermore, Villanueva testified that he didn’t hear Holder say anything before shooting Hussle, contradicting Holder’s defense of acting in the “heat of the moment.” It also supports the prosecution’s theory that the shooting was planned.

During the trial’s opening statements, prosecutors claimed that Holder’s shooting was pre-planned. Bryannita Nicholson, Holder’s getaway driver, also testified, detailing the events leading up to and following the shooting.

After a verbal exchange with Holder, Nipsey Hussle was shot and killed in the parking lot of his Maraton Clothing Store on March 31, 2019. After feeling disrespected during their previous exchange, he is accused of returning to the scene and murdering the rapper.

Holder is charged with murder, two counts of attempted murder, and one count of felon in possession of a firearm. If convicted, he faces life in prison.