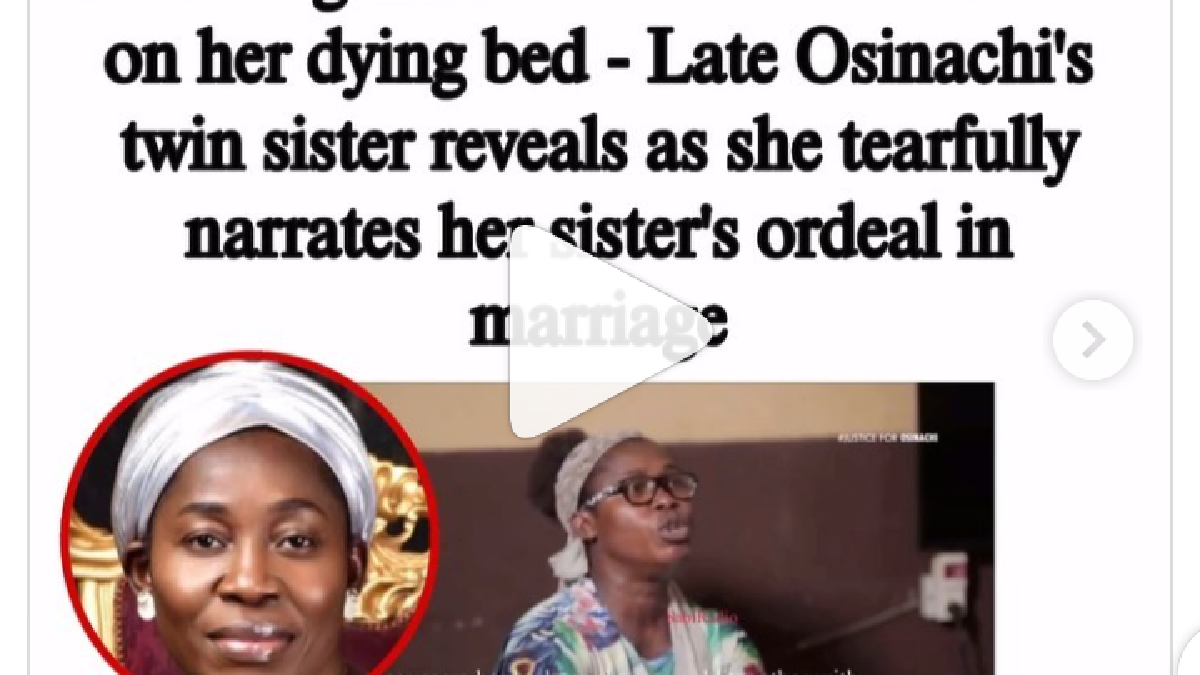 As the painful death of Minister Losinachi continues to make headlines in the past days, more revelations have been made concerning the circumstances leading to her death.

In a recent interview that emerged online, Osinachi’s sister described how Osinachi suffered at the hands of her husband. Here are the 5 revelations made by the lady;

According to the late singer’s sister, Peter Nwachukwu obtained the singer’s monetized YouTube login information while she was in the hospital.

Osinachi had built a flourishing YouTube channel before her death, having as much as 149k subscribers. As a matter of fact, some of the videos on her channel had gathered as much as 1million views.

Peter once threatened Osinachi with Death.

In another development, the gospel singer’s mother claimed in an interview with BBC Igbo that Peter allegedly threatened Osinachi with death if he did not leave their marriage.

She stated that Peter had denied her access to her grandchildren for eight years and that she was not permitted to care for them.

“When she put to bed, I was not told. It was her neighbours and friends that told me. I called her and she confirmed it. I called Peter and he asked me not to bother him, saying he’d do as he pleases”, she said, narrating the incident in a video obtained by The Cable.

“I reminded him of how he identified as a pastor before I accepted that he marries my daughter and he retorted that he owes me no explanation. I told him it’s customary that I visit for Ọmụgwọ (traditional after birth care). He warned that he doesn’t want to see me in his home.

“I called Osinachi, told her, and she pleaded I stay away. Her friends expressed worry that Osinachi doesn’t intimate me about the trouble she experiences in her marriage. Her neighbours called to warn that we should act decisively on Osinachi’s travails. I called her to ask her directly, but she wasn’t forthcoming with details. On her second childbirth, she called me to come over, saying she was suffering.

“She said Peter’s maltreatment of her was becoming unbearable. She said Peter threatened to sniff the life out of her. I called my eldest sister to help pull Osinachi out of that marriage. We went to Abuja and brought her home. With both her three-month-old baby and her two-year-old kid, she stayed for a year and three months before Peter pleaded for her return. I refused, but Osinachi insisted she would go back as there is no splitting a union ordained by God.”

See Also Osinachi Nwachukwu; All that has happened so Far.

According to Osinachi’s mother, the singer’s husband once pushed them out of the house while she was sick.

The late Osinachi Nwachukwu’s mother claims that she arranged for her daughter’s exit from the marriage when her husband’s violence became unbearable, but the gospel singer later returned to her husband on her own volition after 15 months away.

She revealed that Osinachi returned after her husband came with Pastors to beg for forgiveness.

She went on to say that she advised her daughter to leave, but Osinachi refused, claiming that the Bible forbids divorce.

The late singer’s sisters, for their part, revealed how Peter pretended to be a nice person until he married their sister.

They noticed Peter mistreating their sister while she was pregnant and after she gave birth.

Osinachi Nwachukwu’s Husband did Have a job

The singer’s twin sister revealed that Peter is unemployed and has allegedly assaulted and extorted their sister on multiple occasions when she is paid for song ministration.

“Osinachi Sang for me about 3 times and she never told me she had a problem”.- Uma Upkai