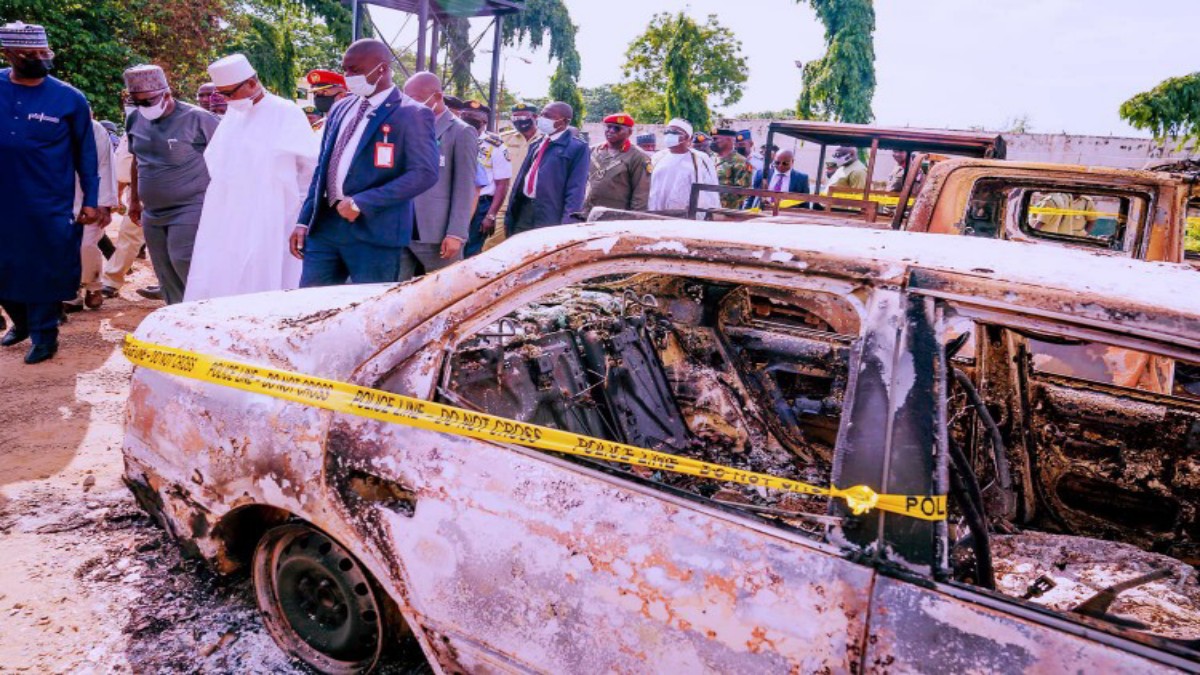 Terrorists successfully attacked the Kuje prison in Abuja, according to eyewitnesses.

Remember that the attack on Tuesday resulted in the release of 64 Boko Haram members.

The attack has since been claimed by the Islamic State in West Africa Province (ISWAP).

In an interview with Premium Times, a resident identified as Chukwuemeka Micheal stated that the attack on Kuje prison was one of his most terrifying experiences as an adult.

On Tuesday night, Micheal and a friend noticed an unusual presence of unknown groups of men along the prison’s street.

kuje prison attack; the military man that was on the road entered my house, removed his uniform and hid the guns.” -eyewitness

He said, “It happened around this area here because we were outside waiting for bikes to take us out because my house is behind the prison here.

“Some guys were there smoking around the prison area. They were there smoking and enjoying themselves. Then my friend told me that we should start walking out because he does not understand what is going on there. I told him ‘no, let’s wait for the bike.’ It was not up to minutes after he told me, that we started hearing gunshots and so we ran.”

“I slept under my bed, and the military man that was on the road entered my house. He removed his uniform and hid the guns. They (the guns used by the assailants) are like machines, they are way faster than the normal ones Nigerians use.”

“It was directly entering the compound even our street was covered with bullets and gunshots and all these things. It was so terrible we couldn’t believe it. We thought a situation like this would end quickly! They started from nine o’clock till like midnight. It was really serious. Soldiers couldn’t even do anything, they were running.”

kuje prison attack; “They gave N2,000 each to the prisoners that escaped and there was someone amongst the prisoners who were shouting Allahu Akbar repeatedly“- eyewitness

Another resident who spoke on condition of anonymity, also stated that the prison street was filled with strange faces on Tuesday night.

He said, “Around the prison border, some officers suspected fishy activities going on around. So, they called one to question him. I don’t know whether he was questioned or not. So I think eventually the person we saw that came was a spy for them.”

A resident said, “They gave N2,000 each to the prisoners that escaped and there was someone amongst the prisoners who were shouting Allahu Akbar repeatedly“There was a man they rescued, who couldn’t escape and wanted to return the money. He was the one that told people the amount they gave them.”

Meanwhile, There is a high level of security in Kuje, where gunmen suspected of being terrorists bombed the Nigerian Correctional Center and released several terrorists in custody.

According to theThis comes as the Nigerian Air Force begins aerial surveillance to assist ground troops pursuing terrorists in the forest.

So far, the operations of soldiers on the trail of terrorists and prisoners who escaped from custody have yielded positive results with the arrest of a large number of prisoners.

Security forces, including the military, police, and the DSS, have set up several checkpoints to conduct stop and searches on vehicles and passengers.

Man who Displays Lots of Cash on Social Media, claims to be one of the “Unknown Gunmen” Operating in Anambra.