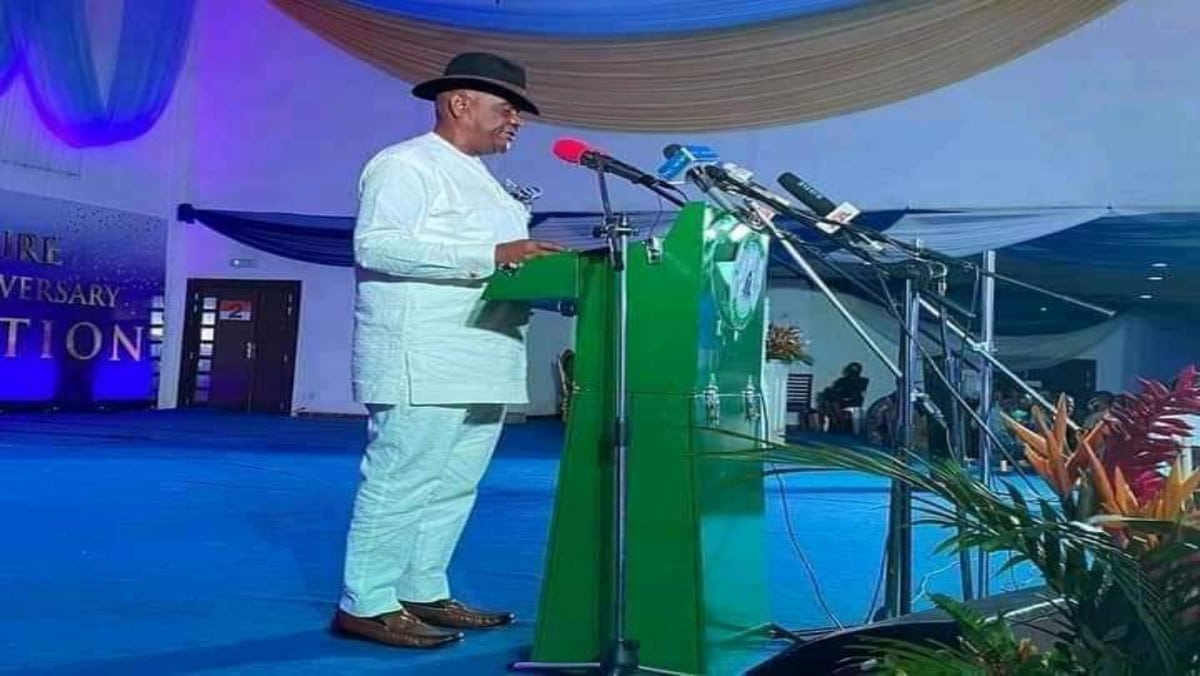 Governor of Rivers State, Chief Barrister Nyesom Ezenwo Wike has described the attempt to foist Lauretta Onoche on Nigerians as a National Commissioner of the Independent National Electoral Commission (INEC) as a bad omen for Nigeria’s democracy.

The governor made the assertion on Monday at Obi Wali International Conference Centre, Port Harcourt, where he gave account of his stewardship in six years which he said has ushered Rivers State into an era of unprecedented development in the 23 Local Government Areas of the State.

Governor Wike said the most fundamental consideration in the appointment of a candidate as an electoral umpire, in a democracy, is the elimination of bias.

The governor observed that there is heavily weighted bias against Onoche because she is a notorious and repulsively partisan dye-in-the-wool member of the All progressives Congress (APC).

“Despite the flood of protests against her nomination and the general lack of trust in our capacity to remain impartial, it seems the APC-led Senate is determined to confirm her appointment as part of their grand design to rig the 2023 general elections well ahead of time, knowing Nigerians would overwhelmingly reject them in a free, fair and transparent contest managed by a strong and independent election management committee.

“As a Governor and concerned Nigerian who loves this country so much and wants our democracy to survive, I wish to appeal to Mr. President, for the sake of his legacy, withdraw Onoche’s nomination to avoid creating more credibility problems for his INEC and restore confidence in our electoral system.

“Where Mr. President lacks the courage to so do, then, the National Assembly, which has a responsibility to defend our democracy must endeavour to wake up on the right side of history by rejecting her nomination.”

Gov. Wike Urges The President and National Assembly to Mid-wife the Birth of Electronic Transmission in Nigeria’s Electorial System.

Speaking on the proposed amendments to the Electoral Act, Governor Wike said everyone who means well for Nigeria’s democracy believes that electronic voting and simultaneous transmission of results have the potential to prevent the large-scale rigging of election.

Governor Wike commended the House of Representatives for affirming and reassuring Nigerians on its positive provisions in the proposed bill on electronic voting and simultaneous transmission of unit results by electronic means.

“President Buhari readily attributes his victory in both the 2015 and 2019 polls to the introduction of the novel card reader device by President Goodluck Jonathan’s Administration; yet he has been overly reluctant on the need to midwife the birth of a new, transparent, efficient and trustworthy electoral system for the country.

“Let me therefore warn that we do not need a soothsayer to tell us that to allow the old ways of doing things and much vilified status quo to continue to prevail in our electoral system as recommended by the Senate’s version of the bill would be a complete disservice to the nation and a recipe for disaster for our country.”

Gov. Wike Praises His Government for what he Called Prudent Management

Governor Wike stated that with commitment to purpose and prudent management of available resources, his administration in the past six years has drastically changed the development trajectory of the State for the better.

The governor said the newly commissioned Rivers Cassava Processing Company by his administration alongside cassava value chain will be used to create wealth, income and jobs for Rivers’ teaming youths who are willing to take to the business of agriculture.

He explained that since 2015, his administration has delivered over a thousand kilometres of Trunk-A roads; embarked on construction of phase one of the trans-Kalabari road, simultaneous construction of ten arterial flyovers, with three already commissioned and connected the ancient coastal community of Opobo to the rest of the State and the country by a tarred road.

The administration, according to him, has also transformed not less than 18 major single lane roads to dual carriage ways with street lights, pedestrian walkways and covered drains, while the dualization of, Ahoada – Omoku, and Egbema Omoku roads is also underway.

The governor said his government has reclaimed vast swathes of sand-filled land for some of the coastal communities, including Abalama, Bakana, and Kula to advance their development and also started the sand filling of 55 and 42 hectares of reclaimed land for Abonnema/Obonnoma and Okrika communities respectively.

In the education sector, the governor said his administration has provided over 1200 classrooms and nearly 14,000 desks to over 200 primary and junior secondary schools. In addition to reconstruction, furnishing and equipping of several secondary schools with modern classrooms, laboratories, libraries, sports facilities, staff quarters and paved interconnecting road networks.

“As a result of the concrete and targeted interventions, the education system is becoming more and more effective and qualitative in the State with enrolment and transition rates of over 98 per cent, while over 80 per cent have consistently recorded 5 credits and above pass rates, including Mathematics and English in WASCE since 2015.”

See also “I NEVER PROMISED TO SOLVE ALL THE PROBLEMS OF RIVERS STATE”- GOV WIKE.

The father of the day, and former Governor of Rivers State, Dr. Peter Odili, who unveiled the 536 pages compendium containing records of Wike’s achievements in office said he feels satisfied with the success records of his political son in office.

Chairman of the Occasion, Onueze C. J. Okocha (SAN), said it is for both the doubters and believers that accounts of stewardship must be given by Governor Wike to enumerate how well he has delivered on his mandate to the State.

According to Okocha, while the current focus may be on the projects used to celebrate the second year of the second tenure, Governor Wike has actually sustained his tempo of performance since 2015.

The Speaker of the Rivers State House of Assembly, Rt. Hon. Ikuinyi-Owaji Ibani, said Governor Wike has acted wisely and in the corporate interest of the State in the past six years.

Ibani remarked that having been a lawmaker under three governors, he has never seen a governor with so much passion to develop Rivers state like Governor Wike. He further added that the State Assembly will continue to collaborate with the executive to move the state forward.

Member representing Obio-Akpor federal constituency in the House of Representatives, Ogundu Kingsley Chinda, said Rivers State has become a bench for good governance because of the sterling performance of Governor Wike in office.

In his welcome address, the Chairman of the Anniversary Committee, Dr. Tammy Danagogo said the State has witnessed tremendous infrastructural development under Governor Wike, with a success record that surpasses any achievement made by past administrations in the State.

Dr. Danagogo, who is also the Secretary to the Rivers State Government, pointed to the fact that posterity will see the indelible marks of the infrastructural revolution championed by a visionary leader.

In her speech, the Chairperson of the Sub-committee on Presentation of Score Card and Commissioner for Social Welfare and Rehabilitation, Mrs. Inime Chinwenwo-Aguma noted the consistency with which Governor Wike has ran an administration that has remained responsive to the needs of the people and the state, at large.

“INEC Is a FRAUD” – Paul Adefarasin.