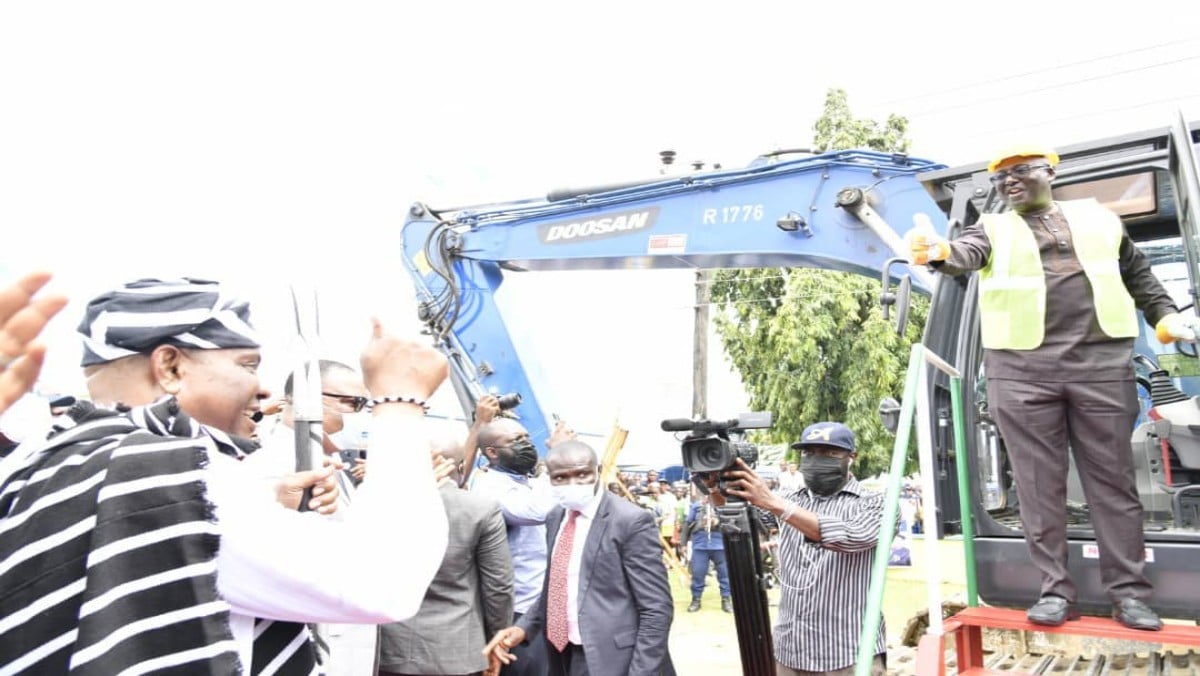 The Governor of Rivers State, Nyesom Ezenwo Wike has ordered the demolition of illegal sprawling market   along the axis of Elele Alimini and Ahoada Towns of the East-West Road in the State.
He has directed all engaged in illegal activities in the area to quit because every standing structures at those places will be demolished with effect from Wednesday 9th June 2021.

See also WE’LL NOT CONTINUE TO TOLERATE BANKS FRUSTRATING CONTRACTORS IN RIVERS -WIKE
Governor Wike gave the warning during the flag-off of construction works at the Ahoada Campus of Rivers State University, and the dualization of Ahoada -Omoku Road in Ahoada Town on Tuesday.
“Let me tell you, the state government has not authorised any market from that Ahoada Junction on East-West Road, keeping to your right and going back to Port Harcourt. Everything there are illegal structures.
“It doesn’t matter who own them.  Whether you come from the South, East, West or North, if you have any of those illegal market structures, from that junction down to Elele Alimini, I’ll bring all of them down.
“I did not authorise any market and nobody can build  market on the road. Not even a local government can do that. So, all of you who have been going to them to collect tolls from them, be prepared. No market must be on the East-West Road.”

Governor Wike also warned trespassers who have built private residences within the Western Ahaoda County High School, Ahoada to await the demolition team from the state government on Wednesday 9th June 2021.
“I have warned you severally and most of you think that nothing will happen. From next week’s Wednesday, anybody that has private residence built within the Western Ahoada County High School, I will bring it down. The land belongs to government and we will not pay any compensation.”

See also RIVERS TO ENFORCE NO WORK, NO PAY LAW IF JUSUN FAILS TO END STRIKE THIS MONTH-GOV WIKE
Speaking further, Governor Wike described as shameful the news of some traditional rulers who sell employment chances meant for their subjects to satisfy their selfish interests.
“I cannot bring develop to this place and criminality will be on the increase. We want companies to come to Ahoada but how will you get employment without companies? Everyday, you cry of unemployment when the few companies that have come, you’ll not allow them to stay. You and your traditional rulers will chase them away with your demands.
“You even sell chances of employing your own people. Woe betide that traditional ruler that I will catch one day, that is selling what belongs to (his) your people because you want to collect money,  I will dethrone that traditional ruler that day.”
Governor Wike also warned one Comasi, a notorious criminal terrorising entire Ahoada axis, to note that he cannot continue to kill people and go unpunished because time is up for him.
Former Deputy Speaker of the House of Representatives, Hon. Chibodum Nwuche performed the flag-off of the Ahoada -Omoku Road, described the event as historic, propelled by Governor Wike’s love for the Ekpeye people.
According to him, what matters in politics is the sense of value the people enjoy, and it is bad when it is about putting people down instead of lifting them up.
Similarly, while performing the flag-off of the Ahoada Campus of Rivers State University,  former Vice Chancellor of University of Port Harcourt, Prof. Joseph Ajienka commended Governor Wike for using the multi-campus system to drive educational and community development that  will also create access to education.
He urged the governor to transform the State University into an entrepreneurial institution where the products of teaching and researches will be developed to provide ready employments.
“I want to thank you for bringing a campus of the university to Ahaoda. Like I hinted, universities today have gone beyond teaching and research to entrepreneurship.
“The operators of universities today are able to transform the products of research into goods and services to contribute to development of start-up companies to employ more people to develop the economy.  I will plead that for the remaining part of your tenure, try and transform the Rivers State university to an entrepreneurial university.”

Earlier, the State government and Julius Berger signed the contract for the dualization of the Ahoada-Omoku Road Phase 1 at the Government House, Port Harcourt on Wednesday.
Governor Wike noted that though the Ahoada-Omoku road ought to be a federal project, the State government cannot to sit and watch her citizens suffer. According to him, work is progressing rapidly on the Egbema-Omoku section of the road.

Julius Berger director finance, Martin Brack thanked the Rivers state government for awarding the job to the company and promised it will be completed within 12 months.

“Corp members can be mobilized for War” – NYSC DG