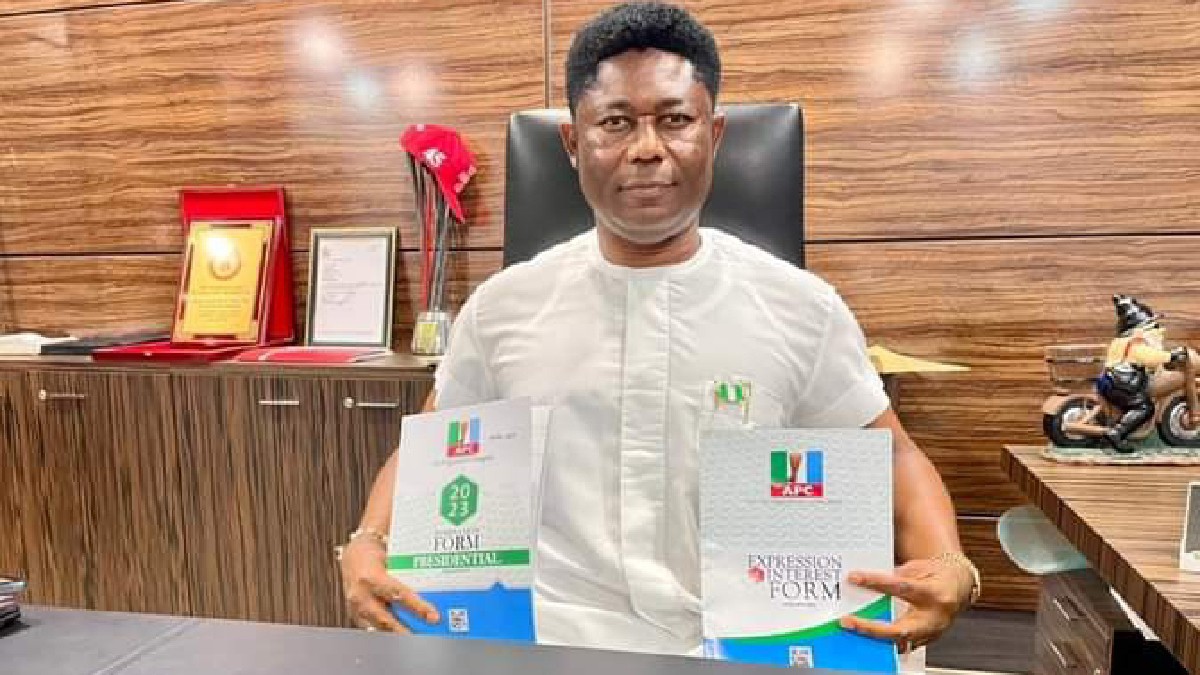 Tein Jack-Rich, an oil magnate, declared his intention to run for President on the platform of the All Progressives Congress on Friday.

This occurred shortly after Jack-Rich submitted his N100 million Presidential forms to the APC.

He also named former Bauchi State Governor Isa Yuguda as the chairman of his campaign organization.

At 47, Jack-Rich is one of the APC’s youngest candidates, trailing only Kogi State Governor Yahaya Bello and Nicholas Felix.

While speaking to supporters in Abuja, the aspirant recounted his life as a street boy in Port Harcourt after losing both parents at a young age.

Later, he established Belemaoil Producing Limited, Nigeria’s first indigenous oil exploration and production company to emerge from an oil-producing community in the heart of the Niger Delta.

The father of two stated that he studied Petroleum Production Technology at Panola College Cartage in the United States, Business Administration at the University of Wales, and Business Management at Usam University, and that he has received several Fellowship and doctorate awards both in and out of Nigeria.

If elected President of Nigeria, he plans to focus on youth and women empowerment, infrastructure, and job creation.

“The global economy is about $83tn and the continent of Africa is just three per cent of the global value chain.. That’s about $2.5tn…it is struggling with the economy of California which has a GDP of $3.6tn.

“California is about the size of Lagos and Ogun states in South-West Nigeria and Nigeria is just 19.8 per cent of Africa’s GDP. That is worrisome,” he said.

According to Jack-Rich, Nigeria has a lot to do and requires the right leadership to lift Africa out of poverty.

In furtherance of our historic project towards the Presidency and in consonance with the extant provisions of the laws of our land which regulate electoral activities, a renowned Industrialist and Humanitarian, Tein T.S. Jack-Rich will today 13th May, 2022 formally declare his intention to run for the office of the President of the Federal Republic of Nigeria on the platform of the All Progressives Congress, APC.

This is sequel to the submission of his Nomination and Expression of Interest Forms in compliance to the Electoral Acts and the Party guidelines ahead of the Presidential Primaries.

It is gratifying to recall that some Compatriots mostly young Nigerians and proponents of a young Nigerian President had voluntarily raised funds amongst themselves to purchase the Presidential Nomination Form for Tein T.S. Jack-Rich as a way of supporting and encouraging him to run for President in 2023 to actualize his Vision for a Prosperous Nigeria.

In light of the foregoing, the Jack-Rich Presidential Campaign Organisation wishes to cordially invite the general public to this historic event holding at the Congress Hall of Transcorp Hilton Hotel Abuja by 6pm today.

The event will also feature the inauguration of Zonal and State Coordinators of our Presidential Campaign Organisation as well as Media Chat with some highly esteemed members of the Fourth Estate of the Realm.