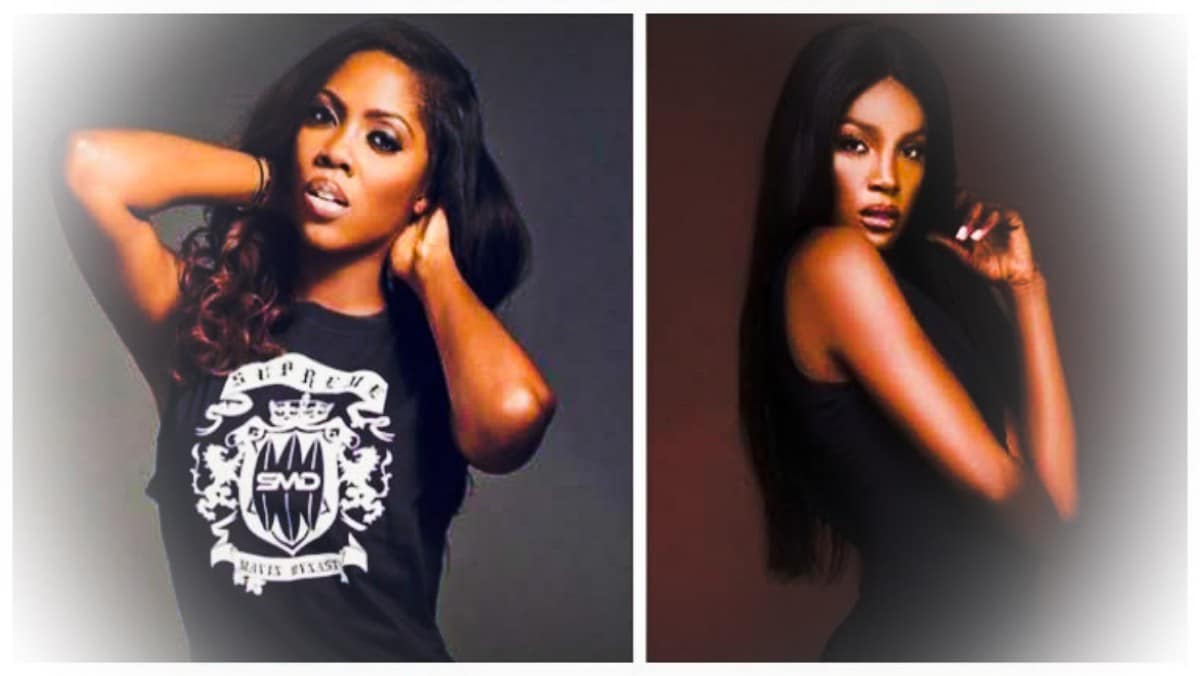 Popular singers, Tiwa Savage and Seyi Shay, have been involved in a fight in a salon in Lagos.

In a video, which surfaced online, the duo was seen being pulled apart from getting physical at the salon as they threw altercations at each other.

Seyi Shay had walked up to Tiwa Savage at the salon to say hi, but Tiwa was not having it.

According to Tiwa Savage, Seyi Shay had no right to walk up to her to say hi, considering what she and Victoria Kimani had done to her in the past.

See also In India, Bride Collapsed and died at her wedding. The groom then married her sister with bride’s body in next room.

Seyi Shay and Victoria Kimani had in 2019 released their covers of Kizz Daniel’s hit song, ‘Fvck You’, where they had both dissed Tiwa Savage.

In her lyrics, Seyi Shay said, “You know I’m not Savage, I pay my bills.”

Victoria Kimani, in her part, accused Tiwa Savage of prostitution and blocking her from a show.

Teasing Tiwa Savage, who is also known as ‘African Bad Gyal’, Kimani said, “Grandma African bad gyal, turning 45 and still claiming bad girl. You can block me from a show but you can’t block my blessings. We all know you selling pu*ssy and it’s so depressing”.

In the video, Tiwa Savage said she was not going to publicly respond to Seyi Shay or Victoria Kimani because she did not want to disgrace or embarrass them.

She said, “Don’t come to me and think you can say hi with the dirty and disgusting spirit that you have. You think I have forgotten what you guys did? How many years ago? You and Victoria Kimani. You think I can forget?

“You did a whole song; you and that b*tch did a whole song. You went on interviews and said sh*t about me and I didn’t say nothing.“I have never slept with your man. I have never taken a job from you. I have never gone on radio to say sh*t. You don’t try and squash sh*t by saying hi. You try and squash sh*t by calling me on the phone and talking about it. If I have an issue, I don’t just walk up to you and say ‘hi’. No”In her defence, Seyi Shay responded, “The only reason why I greeted you is to try and squash all that is going on and to say sorry. I am not going to listen to this because you got your facts wrong.

“Tiwa, how about the things that you have done? You want me to open everything here? I am not like you. I am not going to do that. If you want to start acting up and acting like an ‘agbaya’ right now, carry on.”

However, Seyi Shay’s comment did not sit down well with Tiwa Savage as the latter dared her to spill the secrets she claimed she knew.

She said, “You’re the one that wants to open my ‘nyansh’. Please, open it. Your ‘nyansh’ is the dirtiest in this industry. You f*cking hoe, slut! Open it! There is nothing I have done in this life that I regret. Nothing! Everybody knows I am very proud of my sh*t.

“But you, look at you. You look half-dead. Look at your skin. You know what? For a clear skin, you need to mind your business. That’s what will clear up your f*cking ugly skin.”

Tiwa Savage further denied ever gossiping about Seyi Shay or Victoria Kimani or trying to take jobs away from either of them.

She continued, “B*tch, I am made! I have money; I have nothing to take from you. I am not going to be hired for a show and say something else.”

Tiwa and Seyi then got physical as they called each other vulgar names and were prevented from hurting each other as other salon users pulled them apart.