(Video)"If you have liver, show your face." Apostle Suleman Dares Blogger Who Accused Him Of Sleeping With Nollywood Actresses.
Advertisement 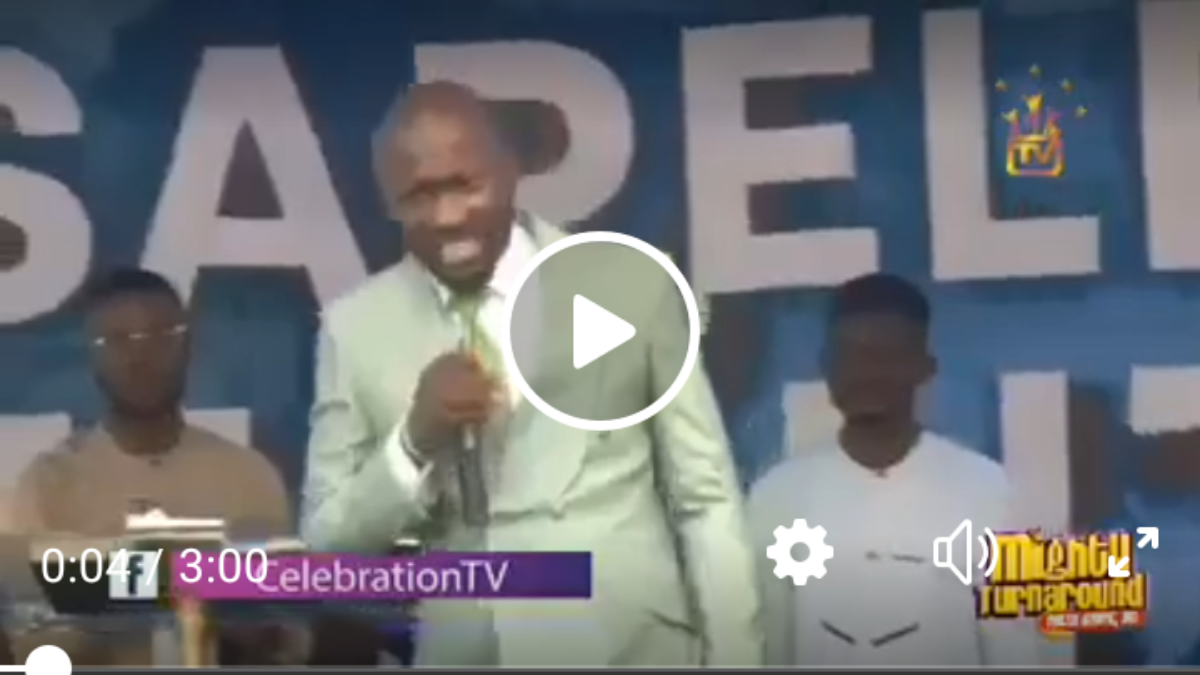 Apostle Johnson Suleman, the founder of Omega Fire Ministry, has issued a challenge to the person behind Gistlover to reveal their identity.

This follows the blog’s accusations that he had slept with various Nollywood women.

Suleiman was also described as evil on the blog.

Suleiman claimed in a video that he was in the middle of a campaign when he learned that a certain site had been dragging him, accusing him of being evil and engaging in sex with a number of famous people.

The priest attacked the blogger, calling them “mumu, ode,” and vowed to be the one to bring about the blog’s premature closure.

Suleiman said: “You know, I’ve been busy with this crusade and I heard that the man is diabolical. Diabolic kee you dere!“Na me you wan drag?! You want to drag me? We will drag ourselves. Some of these people are people that have come to my church.

“I should deny my children because you are writing something. The list no long sef, make the list 200. Mumu! Ode!!”

“You want to drag a generator? Na me be dragging. If you stop, you no serious. We will continue o! We will crase the craze.”

“I am the one that will disappear that blog. You attack politicians, you attack celebrities, you kon come my side. You have entered my trap.”

“When I saw the script, one man o! See list?! One man! I was just laughing, I was calling pastor and was like who be this wan? Where this wan dey?”

“And trust me, some Nigerians went to those peoples’ pages and began to insult them. Anybody that typed an insult, anything they insult those people will backfire on them.”

“Somebody starts a line with ‘tueh tueh! Tueh tueh kee you dere! Is it that kind of person they listen to? If you get liver show your face. You can’t be hiding. You no get mind.”

“Look at me now, I’m insulting you, I showed my face. If you have liver, show your face. And drop your address. Let’s come and meet you there. You no well!”

“So that thing you posted online now, I’ll be shaking, eh Suleiman is shaking! You at me, I’m doing crusade o! Dem no dey drag me. I go use your dragging take popular.”

“If you want to fight me, make sure you have oxygen. Because nothing shakes me. I know some of my people will be angry with me now that I spoke. But that, ‘no talk no talk’ naim dey give dem power.”

Urging his congregation never to cower at ‘blackmail or any form of social media intimidation, Suleiman added: “Understand how social media works. It’s 5 percent from reality. Don’t let anyone intimidate you in this life.”

“If dem give you, give dem! Stop shaking! Don’t pay blackmailers one naira. Anything you want to write, write it. If na power tear, make e tear!”

“I’ve told myself, nobody will bring me down. I won’t let you. I’m on an assignment. If you want to stop me, go and meet God. Only God can stop me. Na Edo I be o!”