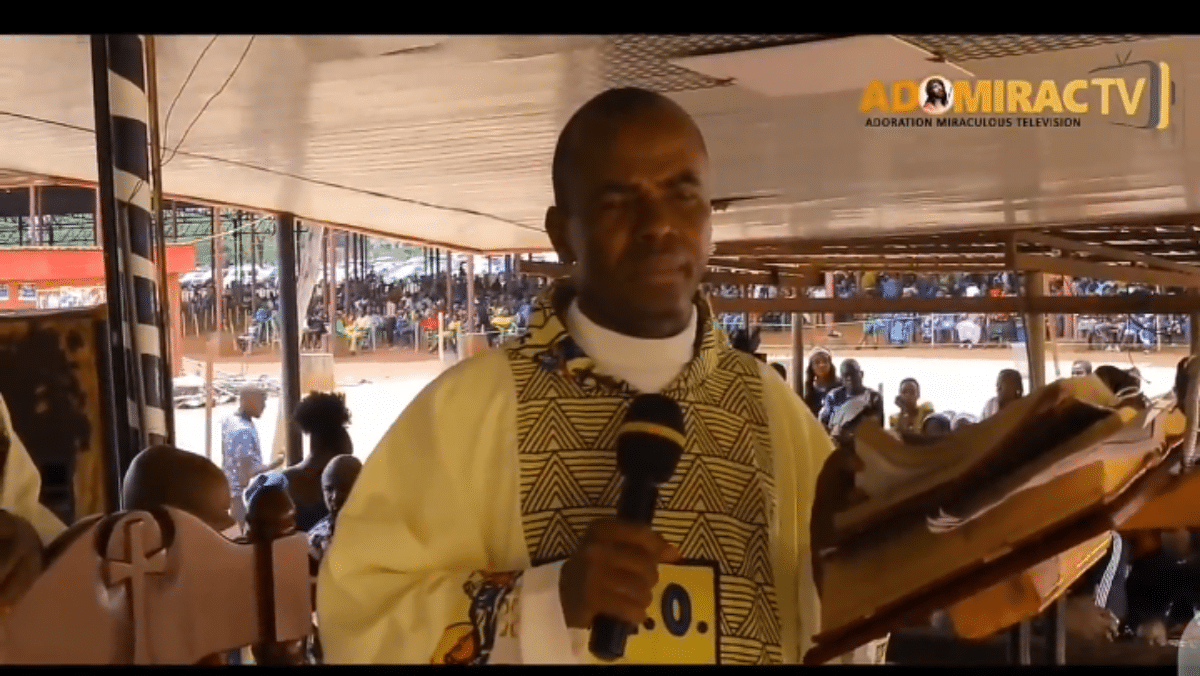 In his sermon on Sunday, Mbaka said the meeting was during Buhari’s first term and not recently as being insinuated.

Addressing thousands in his congregation in Emene, Enugu state, Mbaka said the white men requested his assistance in reaching the President. He said he is doing so much for Nigerian Youths employing at least twenty three thousand youths directly.

In his words: “When they talked about giving Father Mbaka contracts, I don’t want to talk about that, I was laughing. It is a laughable, childish accusation. Whoever is saying that is a shame to himself and shame to the people he is representing.

“The three men he talked about, I am not here to defend anybody’s stupid allegation but God used that man to tell the world that Buhari’s government is not giving me money.

“Shehu, may God bless you for telling everybody that you are not giving me a contract. And these are the three men that we brought that will handle insecurity for the country; they had the gadgets. The white people had the facilities. That was during the first administration.

“They said they will help them in conquering insecurity. They had the platform to end insecurity in this country under one month; under Abba Kyari. I just handed them over to the government people. They denied them of these.

“I don’t even know these people. They just came to Enugu and said, can I help them reach the government, that the level of insecurity in this country and how Nigeria has been shipping their oil out, refining and bringing them back, that we are losing.

“That they have all it takes to revive the oil apparatus in the country and get the whole youths employed and the issue of insecurity will die. These are the three people they rejected their offer, since they know how to talk.”

“All the people they have been giving contracts, are they better than me? Am I begging them, do they know how many people I feed? Fortunately, they reported that they denied me of the contract — which contract?”

“And even the people they are talking about that went there, I didn’t even discuss one percent of ‘if you get this contract’; contract of securing the country? What am I going to gain from it?

“They have shown that they don’t have what they call, reward mechanism. If Shehu is a human… I don’t even know who the Shehu is. He should be apologising that by now, they have not come down to say nagode Allah for surviving whatever they are passing through.

“The last person this administration should fight is Father Mbaka talking here because if they speak against me, the anger of heaven will be upon them and how they will end will shock everybody.”