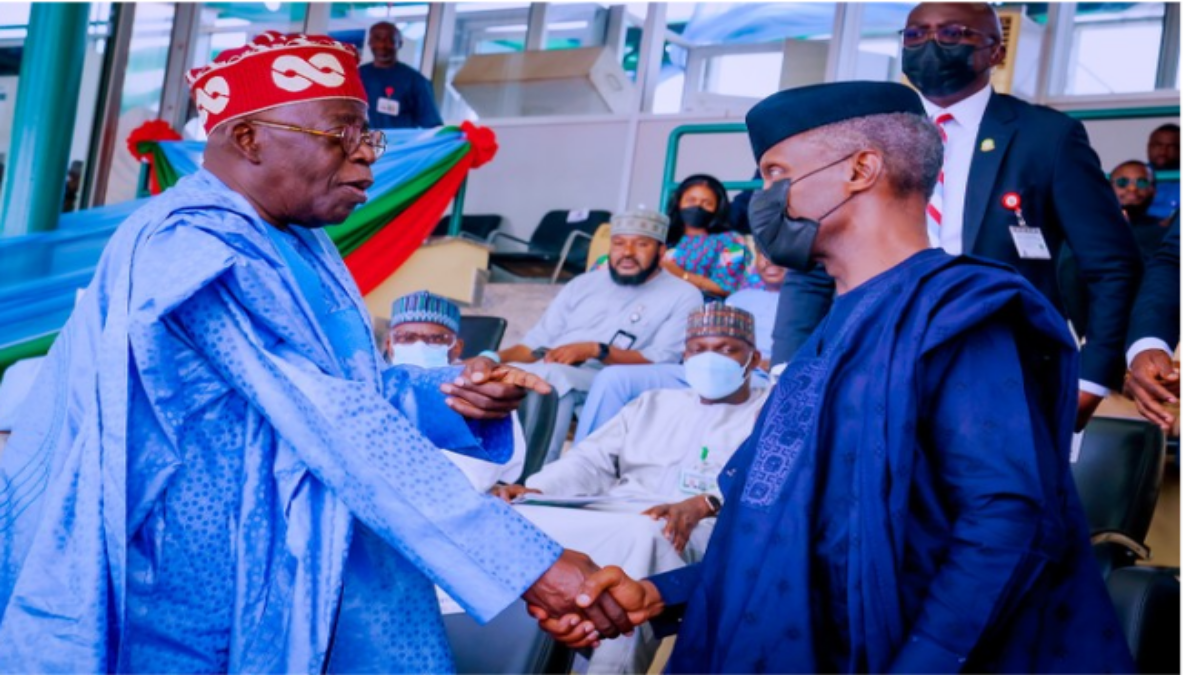 Nigeria’s Vice President, Yemi Osinbajo, lost the All Progressives Congress, APC’s 2022 presidential primary with 235 votes. This was against the backdrop of a slew of unfavorable circumstances.

Osinbajo was defeated by his benefactor and APC national leader, Asiwaju Bola Tinubu, who received 1,271 votes to become the APC flag bearer for the 2023 presidential election.

Prior to the primary, analysts predicted that Osinbajo would get bruised for challenging his leader and benefactor, an unquestionably Nigerian political enigma and leading presidential aspirant, to a political duel.

However, the young politician stood his ground and followed the contest to the end. Although no one would’ve expected Osibanjo to defeat Tinubu in an open contest, however, a few pundits gave him a chance.

The presence of Tinubu in the presidential race was the major obstacle to osibanjo’s chances of clinching the APC presidential ticket.

Tinubu is seen by many as a political Godfather to many. His influence cannot be argued by anyone. Therefore, anyone who would win Tinubu in a party primary must have the full support of Mr. President.

Political analysts had predicted that Osinbajo would secure the party’s ticket by leveraging the influence of his superior, President Muhammadu Buhari. However, the president did not appear to support any specific candidate.

This is not a stretch, given Buhari’s reputation for being hesitant and indecisive during critical moments when the party needs to be most proactive.

While it is widely known that Osinbajo is relying on the influence of his superior, President Muhammadu Buhari, to secure the party’s ticket, this has not been reciprocated, not even in the President’s body language.

Bola Ahmed Tinubu is a political warlord. He was ready to do whatever it took for him to attain his presidential ambition.

He recently stated in one of his presentations that he was willing to play dirty in order to achieve his presidential ambition.

Not only that, but Tinubu was also seen in a video openly declaring that it was his turn to be president.

Tinubu stated this during a visit to Abeokuta to seek the support of delegates ahead of the All People’s Congress presidential primary (APC).

The APC leader, who spoke in Yoruba, recalled that he had played important roles in the APC’s emergence as the national ruling party.

He said “I have been there from the days of the Alliance for Democracy (AD), through the Action Congress of  Nigeria  (ACN) and which eventually metamorphosed into the APC.

“I have served for over 25 years and helped many achieve their political ambitions.

‘Your governor, Dapo Abiodun, could not have become governor without God’s and my support.”

“Go and check the video, they did not want to hand over the party’s flag to him as the APC flagbearer for the 2019 gubernatorial election in Ogun.

“I was the one that insisted that it should be given to him.

“If not for me that stood solidly behind Buhari and encouraged him to go ahead, he could not have become president,” he said.

“Since his assumption of power, I never took ministerial position,  begged him for any contract or  loan.

“All I am saying is that it is the turn of the Yoruba speaking people to become president and within the yoruba people, it is my turn.

“I have adopted and protected many political children, but in the face of danger, one has to first protect himself.

“I have served enough. I do not want to become history. It is my turn to become president. It is a matter of right for me.

Watch the video here. You may need a Yoruba interpreter if you don’t understand Yoruba Language.

While some saw Tinubu’s outburst as completely unnecessary, a political warlord like Tinubu understands the significance of such an outburst.

A political insider made it clear that Tinubu knew exactly what he was doing. He said that the outburst was a calculated plan to put Buhari under pressure with a view to stopping him from supporting anyone.

Bola Ahmed Tinubu, the presidential candidate of the All Progressives Congress, was seen shaking hands with Vice President Yemi Osinbajo on Tuesday.

This comes after Osinbajo finished third in the party’s flagbearer election.Both politicians were seen conversing at the ceremony’s conclusion.