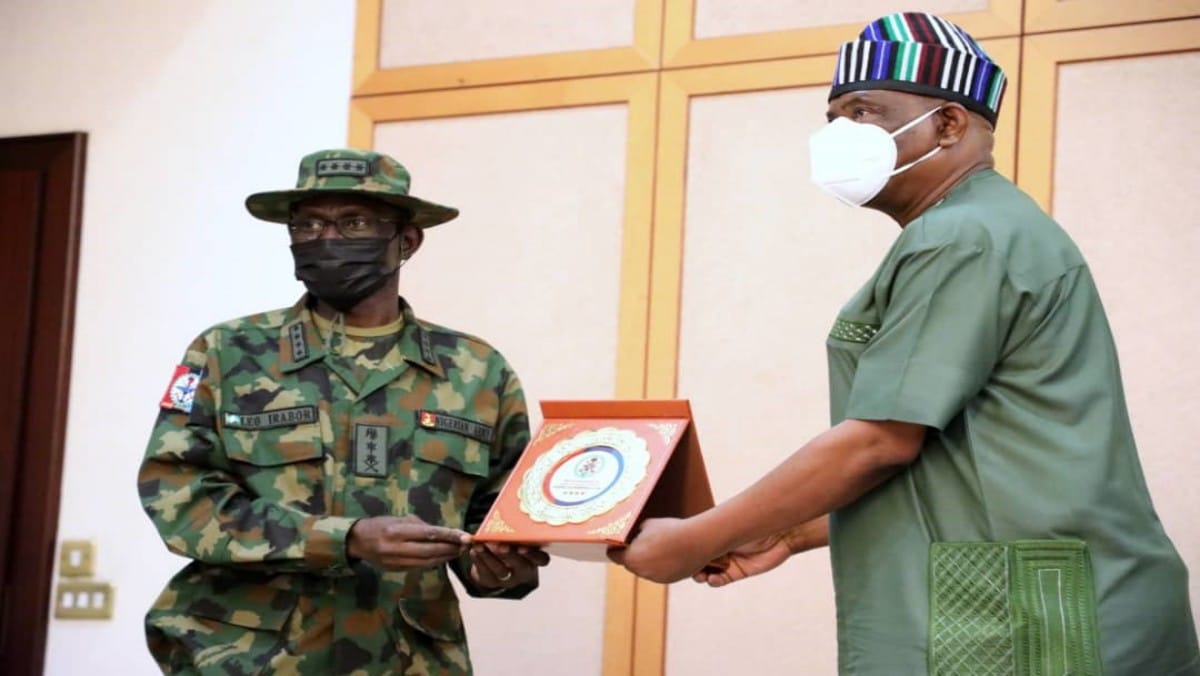 The Governor of Rivers State, Nyesom Ezenwo Wike has charged the Chief of Defence Staff, General Lucky Irabor to reduce the level of insurgency in the country.

Citing terrorism as one of the biggest existential threat to the country, the governor said he will liaise with the Nigerian Governors Forum to support more money be released for the procurement of arms and other equipment for the military to end insurgency.

Governor Wike stated these when the Chief of Defence Staff, General Lucky Irabor and other top military officers paid him a courtesy call at the Government House, Port Harcourt.

The governor told the new Chief of Defence Staff that God in his infinite wisdom had deemed it necessary for him to be in charge of the military at a time when the Minister of Defence had cause to declare that Nigeria is bleeding.

“You have been brought in to see how you can solve the security problems of this country. For us as a Government we have no choice but to support the security agencies, particularly, the Army now that we have terrorists activities in this country.”

The governor said no sane government will fold its arms and remain indifferent at this critical moment when the country is grappling with unprecedented security threats orchestrated by non State actors.

“I believe you will make us proud by ensuring you reduce the level of insurgency.”

Governor Wike, expressed dismay over the misappropriation of $1Billion withdrawn from Excess Crude Account to procure arms and other equipment for the military. He wonders how anyone will expect the armed forces will fight bandits and terrorists without requisite equipment.

He said irrespective of the controversy surrounding the $1Billion for procurement of arms and other equipment for the military, he will support the Nigerian Governors Forum authorisation of additional money to equip the Armed Forces.

The Rivers State governor disclosed that the Army will soon take delivery of the five gunboats the State government promised to donate to them.

He thanked the Nigerian Army for proactively checkmating the activities of the proscribed Indigenous People of Biafra (IPOB) and not giving any room for any terrorists attack in the State.

The governor assured the Chief of Defence Staff that the State Government will continue to support the Army and other security agencies. He, however, appealed to him to ensure that the military shun politics and adhere strictly to their constitutional mandate of protecting the country’ territorial integrity.

Governor Wike recalled how during the 2019 general elections, the former General Officer Commanding the 6 Division of the Nigerian Army in Port Harcourt tarnished the image of the Army.

The governor explained that the lives of Army personnel and citizens lost during the election would have been averted if the former GOC did not order his men to snatch ballot boxes and turn the 6 Division to an extension of the Independent National Electoral Commission office.

“I believe now that you’re in charge as Chief of Defence Staff that that will not repeat in 2023.”

He further said: “We have respect for the Army, particularly the role you play. These are people who will go and fight for our own interest and die in course of that. So, everybody must respect the institution.”

The Chief of Defence Staff, General Lucky Irabor commended Governor Wike and the Government of Rivers State for supporting the Army and other security agencies.

He appealed to the citizens of the State and the Niger Delta to continue that peace reigns in the region for Economic activities to thrive.

General Irabor said he was in the State to assess some of the various operational activities of the Armed forces and to meet with the personnel.

EFCC, NEITI to Strengthen Collaboration against Corruption in the Extractive Sector