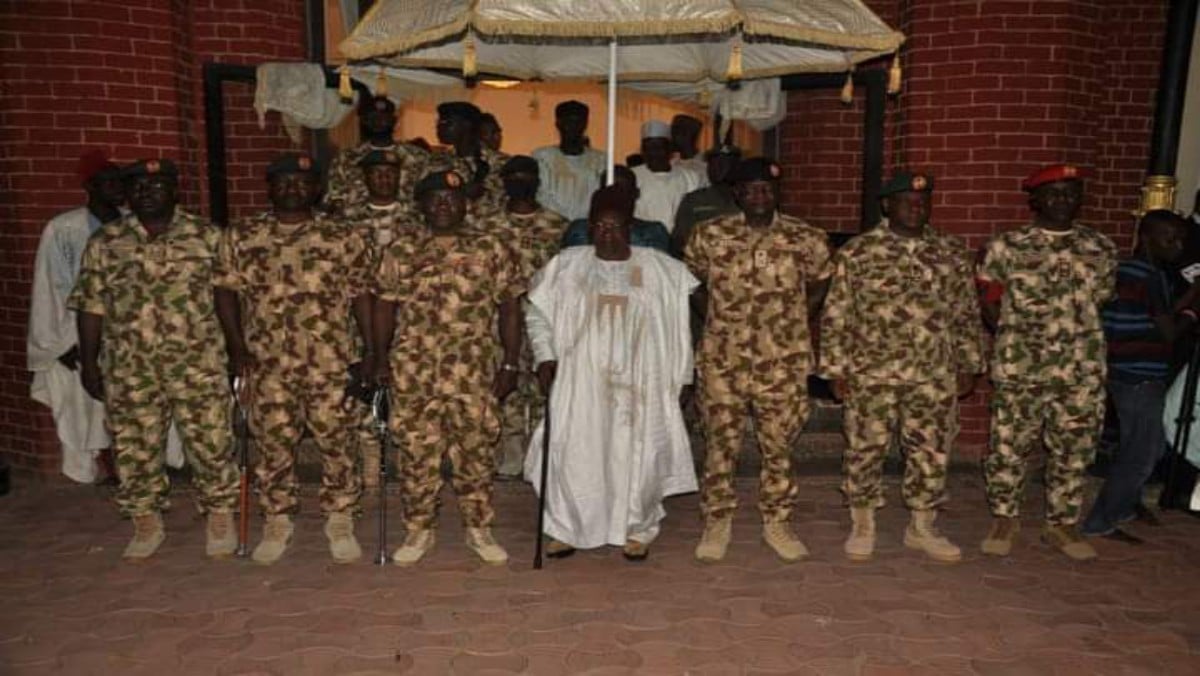 COAS alongside his men, with Shehu of Borno, His Royal Highness, Alhaji Abubakar Ibn Umar Garbai El-kanemi, CFR during the SA [Source: Facebook]

The Chief of Army Staff (COAS),
Major General Faruk Yahaya has said the traditional leaders were critical to the success of ongoing operation to end Boko Haram insurgency and terrorism in the Northeast.

COAS made this known during a courtesy visit to the Shehu of Borno, His Royal Highness, Alhaji Abubakar Ibn Umar Garbai El-kanemi, CFR and Members of Borno Emirate on Friday 25th June, 2021 in his palace Maiduguri, Borno State.

The content of the visit was revealed in a post released on the verified Facebook page of the Nigerian Army by Colonel ADO ISA who is the Deputy Director Public Relations, 7 Division Nigerian Army/Joint Task Force (North East)Operation HADIN KAI26 today.

According to the post, General Faruk said he was pleased to be at the Shehu’s palace with Principal Staff Officers from the Army Headquarters to pay respects and homage to the revered traditional ruler.

He said he arrived the state earlier in the day on operational visit to the Theatre and felt it was an honour to visit the Shehu as father, leader not only in Borno but also in the country, to receive royal blessing for the task ahead of him.

He appreciated the support of the royal father and the entire Emirate even while he was in the State as the Theatre Commander, Operation HADIN KAI before his appointment as the 22nd Chief of the Army Staff.

He noted the support of the royal father and the Emirate has led to some of the successes recorded in the operations against the terrorists. He solicited for more support.

The Shehu of Borno, Alhaji Abubakar Ibn Umar Garbai El-kanemi, CFR commended the military for the gradual return of peace to the State and Northeast. He said 17 of the 27 local government areas previously occupied by Boko Haram Terrorists some years ago.have been recaptured and civil authority restored. He asked the COAS not to be deterred and pledged the support of the Emirate to the Army leadership and Military generally.