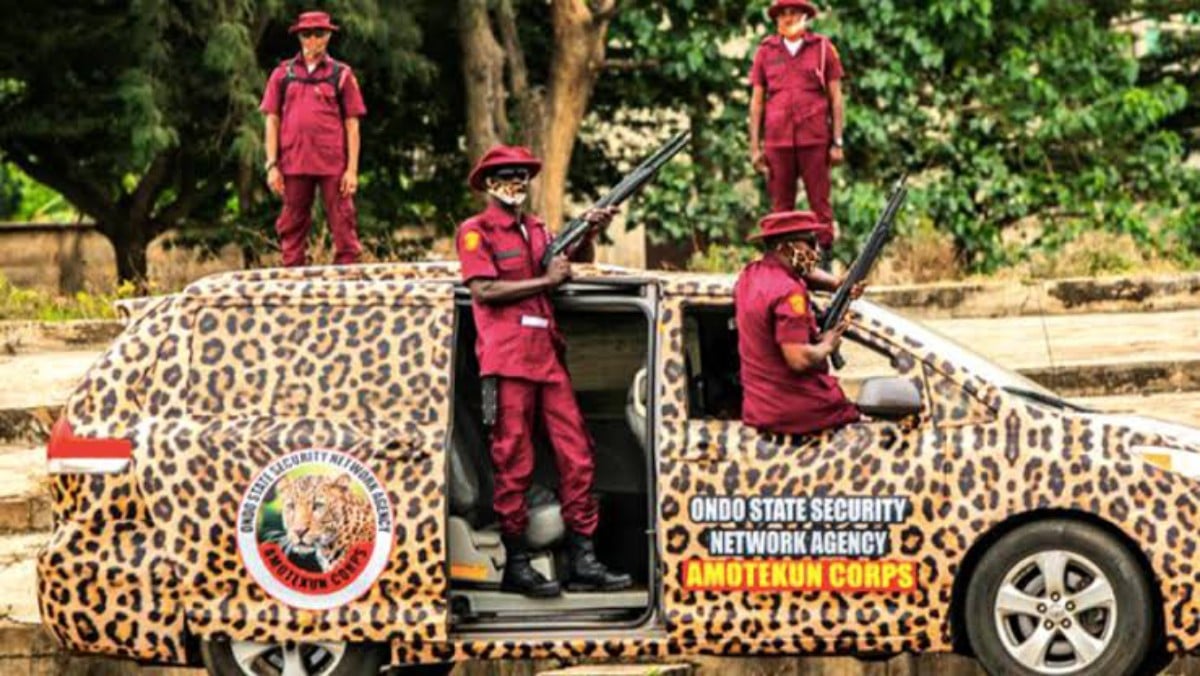 The Ondo state chapter of the Western Nigeria Security Network, Amotekun, in Okitipupa LGA, says it has arrested about 45 youths at the entrance of a military barracks after arriving in a truck on Thursday.

The 45 men were arrested in Okitipupa, headquarters of Okitipupa local government after they were dropped off a truck.

They reportedly told interrogators they were invited to the state to participate in a military training exercise.

Another source said they claimed they were invited to the state by an agent who promised to engage them as security guards to protect pipelines.

Security sources said the men were to be trained inside the Army barracks but were caught before they could proceed inside the barracks.

According to the source: “Things went awry when the people of the community noticed the unusual movement of the young men and raised the alarm. All the security agencies distanced themselves from the suspected invaders.

“I don’t know why the authorities here refused to take up the issue especially when Amotekun beckoned on us to take over the matter because it’s a pure security risk.

“I know our command was contacted but the request to take custody of the suspects was turned down for unknown reasons”.

But the Amotekun Commander said the men could not give a satisfactory explanation about their mission to Ondo State, which was why they were sent back to their states.

Adeleye said an investigation showed they were brought in from Kano and Jigawa states.

Adeleye stated the men could not state who invited them to the state for training.

He, however, said investigation further showed the consultant that invited them has been arrested in Delta State.

According to him: “Our intel showed us the influx of some people especially to Okitipupa Local Government Area of the state. So, we monitored and we found out that they converged in front of the army barracks in Okitipupa.

“They were there for a couple of hours and at that point, we tried to find out what their mission is but because they couldn’t give satisfactory explanations we moved them to our local office first in Okitipupa to try to debrief them and from the debriefing at Okitipupa, we had to move them to the state headquarters for proper debriefing.

“When they arrived, we profiled them and we found out that they are primarily from two major states, Kano and Jigawa States.

“The mission that they claimed they came for is not too clear and upon profiling, we found out that the majority of them don’t even know how they got to where they got to.

“All they were told is they were going for training. Training for who, by who or whatsoever, they do not know.

Speaking on the sponsors of the youths, Adeleye said: “The sponsors happened to also claimed that they belong to an NGO, that they contracted out the training to a consultant who was supposed to train their men. They said they were going to train them as security guards.

“But as part of our discreet investigation, we found out that the so call consultant had been arrested in Delta State and I confirmed from the Delta State Police Command as at today that he’s still in their custody. So, we intend to release them, we will release all these ones and ensure that they are taken back to their states.

Nigeria is better together- Tinubu.

Why the Senate cannot do anything to Pantami-Ajibola Basiru