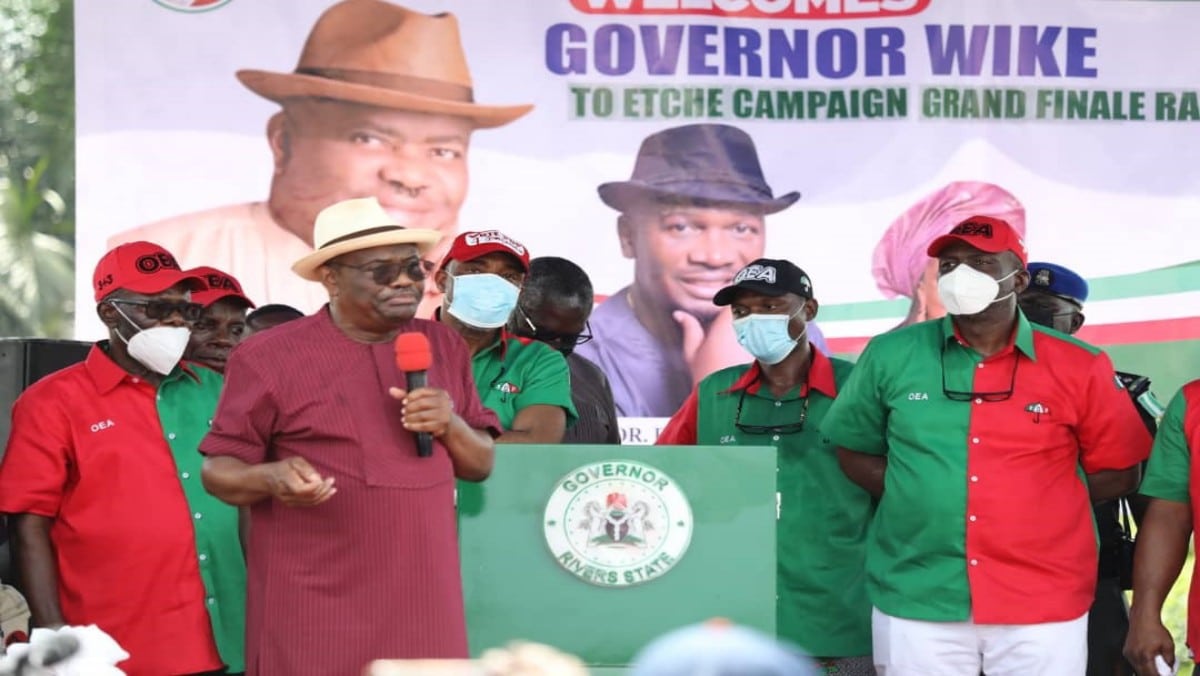 Governor of Rivers State, Nyesom Ezenwo Wike, says anybody jostling to be president of Nigeria will also need to secure votes in Rivers to combine with either Kano or Lagos to emerge victorious.

Such pivotal position, he said, establishes the importance of Rivers State in the political scheme of the country, and nobody will be allowed to undermine it.

Governor Wike made the assertion at the grand finale of the Peoples Democratic Party (PDP) Local Government Election Campaign that held at Ulakwo in Etche Local Government area on Thursday.

“I keep telling the Peoples Democratic Party (PDP), that no state has given more votes to the party than Rivers.

“And it is only in Rivers, in the whole of South-South, that the All Progressives Congress (APC) didn’t get 25 per cent votes in 2019 General election. We thought them a lesson.

See also A twitter user accuses Sowore of applying for a grant in her name without her consent.

“In Nigeria, nobody wins presidency if you didn’t win either Rivers and Lagos or Kano and Lagos together. Rivers is not a state anybody can joke with. Some states went to negotiate with them. Rivers didn’t do it.”

Governor Wike took a swipe at Senator Andrew Uchendu for his uncanny comments in the media, and wondered what courage he has to talk against PDP administration that is ending the suffering he inflicted on his people.

“I was watching Arise Television the other day, and I heard Senator Andrew Uchendu and the Chief Medical Director of University of Port Harcourt Teaching Hospital. The CMD said I asked him to indict the former governor. I don’t know that he has such judicial power. I don’t also know his basis.

“He (CMD) set up a target. The man was lobbying to be a Commissioner where our former party chairman comes from without even doing due consultation. Because I didn’t give him Commissioner, he ran and started to abuse me.”

The governor said it was regrettable that Senator Andrew Uchendu spent several years in the National Assembly and close to the former administration in the State but couldn’t fix the road leading to his village.

“I am going there to flag off the road and to tell his (Uchendu) community, see what your son couldn’t give you. He (Uchendu) has collected the contract from NDDC every year, he abandoned it. I am going to shame him by doing that road.”

Speaking further, Governor Wike said the fortunes of Etche people have improved under the PDP led administration in the state.

According to him, under his administration, Etche sons have been appointed as Vice Chancellor of the Ignatius Ajuru University of Education and also as a judge.

He said his administration has established a campus of the River State University in Etche and awarded contracts for the Igbo-Etche -Rumuokwurushi Road, Olakwor-Nihi Road, and the Chokocho-Ozuzu Road that was abandoned by Ogbonna Nwuke, despite being paid for the project.

Governor Wike said Etche will continue to be relevant in the political scheme of the State and be part of the process of discussion among stakeholders in deciding the next governor of the state.

“If I say I will do something, I will do it. Ordinarily, if Nigeria is a place of true democracy where votes counts, no party can campaign in this state. Their hope is to use security?

“Have you seen second tenure governor working as we are doing? It is because of the love we have for this state. We all own this state together. All those threats of what they’ll do in 2023 are all foul talks.”

The governor urged the people of Etche to continue to work in unison ahead of 2023.

Leader of PDP in Etche, Prince Emma Anyanwu said the people of the council have no regret associating with Governor Wike.

Another chieftain of the PDP, Mr. Allwell Onyesoh, lauded the governor for the numerous developmental projects his administration has done in Etche