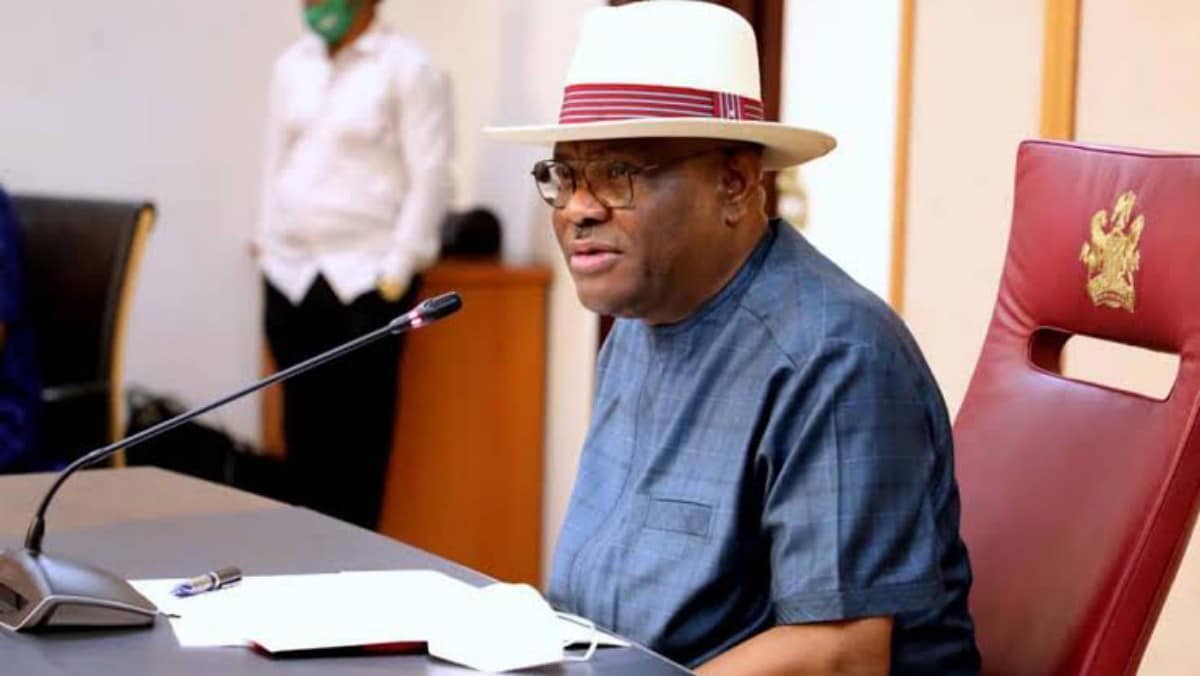 Rivers State governor , Nyesom Ezenwo Wike, has declared restriction on vehicular and human movements, within and out of the State from the midnight of Friday 16th April 2021 till 5.00 p.m. on Saturday 17th April 2021 when the State council polls is over.

The governor, in a state broadcast said the restriction of movement is necessitated by conduct of the State Local Government Election by Rivers State Independent Electoral Commission (RVSIEC) fixed for Saturday 17th April 2021.

“Consequently, vehicular and human movements, within and out of the State and the Local Government Areas is hereby totally restricted from the midnight of Friday 16th April 2021 to and until the end of polling at 5.00 p.m. on Saturday 17th April 2021, except for persons and vehicles strictly on essential duties with genuine and valid identifications.

“The security agencies have been directed to strictly enforce the restriction on human and vehicular movements and arrest and prosecute any person who dares to violate this ban. I have been briefed and received assurances from the RVSIEC that it is fully prepared and ready not only to conduct but also to ensure that polling is hitch-free, fair and credible.”

Governor Wike said he has been briefed and received assurances from the State’s Security High Command about the state of preparedness of the security agencies to provide adequate and effective security at all the polling units and collation centres to guarantee safe, secure and peaceful election.

He urged voters to conduct themselves peacefully throughout the election and refrain from any act or behaviour that could cause a threat to the peaceful conduct of the election as election can never be a do or die affair; neither is it worth the blood of anybody.

“Furthermore, the security agencies have clear directives to arrest and deal decisively with any person or group of persons, no matter how highly placed, who attempts to prevent the peaceful and orderly conduct of the election or compromise its integrity in any way.

“We call on community leaders and the general public to be vigilant and promptly report every suspicious movement and or illegal activity around polling units and collation centers in their localities to the security agencies for immediate action.”

The governor explained that Saturday’s election is necessitated by the fact that the three-year tenure of the incumbent Chairmen and Councilors of all the 23 Local Government Councils will expire and terminate on the 15th of June 2021.

See also Issuance of SIM cards to resume on April 19….

“As a Government that believes in the practice and consolidation of democracy, and in fulfillment of our constitutional duty to ensure the sustenance of democratically elected Local Government Councils in the State, we have since decided never to run our local government system with Caretaker Committees, except in inevitably justifiable circumstances.

“It is against this background that this election has been fixed to once again give our people the opportunity to effectively participate in the process of electing and constituting the next set of Chairmen and Councilors to administer the 23 Local Government Councils.”

He assured every resident of the state that Saturday’s election shall hold as scheduled throughout the State in all the 4442 polling units, 319 wards and 23 Local Government Areas as the State Government has given every necessary logistical support and enablement to both the RVSIEC and the security agencies to ensure that the election is free, fair and credible.

“I am pleased to note that with 17 different political parties participating and appearing on the ballot, our people have truly been given the opportunity to responsibly exercise their freedom of choice based on the manifestoes of the parties and the campaign promises of the candidates.

“This is indeed an important opportunity we can’t and should not toy with because the choices we make on this election will correspondingly produce the type and quality of leadership that will preside over the affairs of our Local Government Councils for the next three years.

He appealed to all registered voters to consider the value of their votes and turn out impressively to vote for credible candidates of their choice in a bid to further deepen democracy and advance good and effective governance at the grassroots.

“I wish to assure you that the State Government is very much alive to its responsibility to creating the enabling environment throughout the State for all voters to peacefully exercise their civic responsibility at their polling units.”

Issuance of SIM cards to resume on April 19….