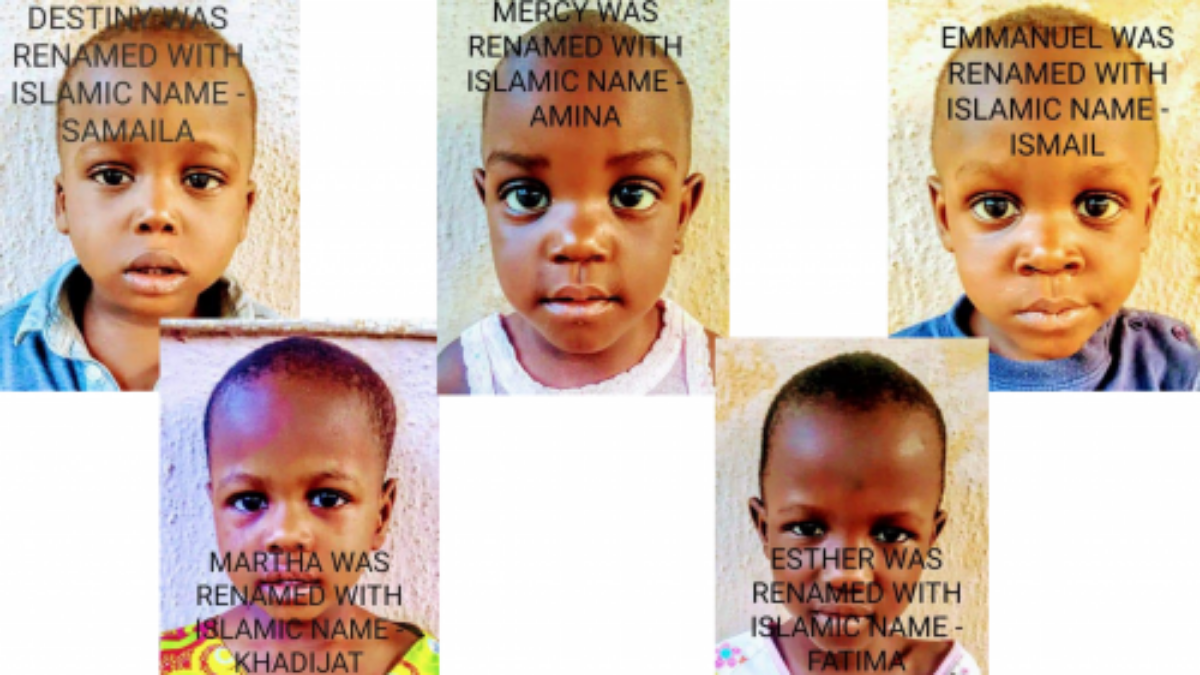 The United States Nigeria Law Group (USNLG) is calling for the immediate release of 16 Christian children who were allegedly kidnapped and Islamized by the Kano State Government two years ago.

The children were forcibly removed from two Christian mission orphanages in Kaduna and Kano during a Christmas Day raid in 2019, according to the Washington-based organization.

This was stated by Emmanuel Ogebe, the group’s principal partner, in a statement.

Kano State, according to the group, has become Nigeria’s most religiously intolerant, aggressive, and malicious state under Governor Abdullahi Ganduje.

UNSLG stated: “Over a dozen children unjustly taken away from two Christian mission orphanages in Kaduna and Kano spent yet another Christmas in a Muslim orphanage in Kano.

“In a Christmas Day raid, 19 children were first seized from the Kano branch of Du Merci orphanage and taken to Nasarawa Orphanage Kano on 25th December, 2019. Some of the children have remained in Kano State’s custody for two years now and marked their third Christmas in captivity this weekend.”

“The police and NAPTIP (National Agency for the Prohibition of Trafficking in Persons) travelled to the Kaduna Du Merci Orphanage where another eight children were taken to join the 19 in Nasarawa Orphanage, Kano on 31st December, 2019. If they’re not released this week, these children unjustly taken by the government will also mark two years of captivity on New Year’s Eve.

“The Kano State Ministry of Women Affairs abandoned 2 sick kids in a private hospital and in 2020 released other 8 (15-22 years) children to Christian Association of Nigeria because the children were rebelling for not being allowed to attend church and school. The eldest orphan who was caring for and protecting the younger ones was sent out of the Nasarawa Orphanage in December 2020.

“However, 11 children are in Nasarawa Orphanage (10-15 years) and 5 children in Gaya Orphanage (4-8 years). Altogether more than half the seized children remain in their custody.

“The 16 children are being illegally detained by Kano State despite the dismissal of bogus child-trafficking charges against the missionary who established Du Mercy Orphanages – Prof Solomon Tarfa – more than six months ago.

“Worst of all, the children have been neglected, abused and Islamized.

“The children are reportedly emaciated, unkempt and traumatized. According to impeccable sources, the children can no longer speak English and now communicate only in Hausa having also been deeply indoctrinated with quarantine recital in Arabic.

“Even more bizarre, the five Christian orphans are being guarded by the Hisbah religious police of Kano State confirming the religious motive of the government in Islamizing the Christian children.

“The Hisbah has notoriously just recently chided a Muslim lady for winning a beauty pageant and has serially harassed Muslims and Christians alike for ‘immoral haircuts’ amongst other strange actions.

“The forceful conversion of these young children is just the latest example of Governor Ganduje’s radical Islamization agenda. The Governor had been featured in a viral video bribing Christian girls with cash to convert to Islam.

“Now it’s been revealed that he not only uses state funds but Kano State government institutions in collaboration with federal government machinery to force conversions.

“Governor Ganduje who hosts the majority of Nigeria’s 13 million out-of-school children, deported tens of thousands of Muslim almajiri street urchins after utilizing them as underaged voters in the 2019 election rigging.

“If he truly had good intentions, why did he not accommodate and take over these Muslim kids as he did with the Du Merci orphans?

“It is highly unfortunate that at a time when Islamic slave centres masquerading as schools where captives were recently freed were discovered in Kano, the government continues to hold captive orphans from a Christian orphanage where they were living nurtured and well-cared for.

“Instead of joining hands to help mitigate Nigeria’s shameful ranking as the country with the most out-of-school children in the world, Kano has turned English-speaking children into Hausa-speaking almajiris.

“Sadly this is the same model applied by the Federal Government with regard to the Chibok schoolgirls in the USA. Following their hostile takeover of five Chibok schoolgirls, none of them has graduated university, five and a half years after FGN handed them to the Murtala Mohammed Foundation.

“Indeed the majority did not pass secondary school in the US till date with some dropping out of school altogether while their non-government classmates have graduated with various university degrees.

“At least one of the escaped Chibok girls converted to Islam in the US in the custody of Murtala Mohammed Foundation and the Federal Government months after they were taken from International Human Rights lawyer, Emmanuel Ogebe who sponsored them to the USA.

“Like the Du Merci kids in Kano State custody, most of the Chibok girls handed to Murtala Mohammed Foundation by the Nigerian government in America have not improved English-speaking after five years.

“We call on the Kano State government and the Federal Government to immediately free the Du Merci 16 more so following the acquittal of Prof Solo Tarfa on the abduction charges by the High Court of Kano since June 24, 2021.

“We especially draw urgent attention to the case of Moses, one of the orphans who was burnt in the Kano State orphanage and hospitalized for seven months and is not receiving proper medical post-op care https://www.csw.org.uk/2021/11/09/press/

“Having abandoned two in the hospital and released nine who have since returned to the very Du Mercy orphanage they were taken from, there is simply no basis, in law, fact or logic, for Kano state to continue to illegally detain the remaining 16 orphans.

“Kano State must RELEASE the Du Mercy 16 before the end of the year otherwise a supplementary report will be filed against Governor Ganduje and other key actors for child abuse and child conversion contrary to the Nigerian constitution amongst others.

“We also want to caution Kano State about the case of three Christian men mischievously charged with kidnapping for rescuing the fiancé of one of them who was being forcefully wedded to a Muslim by Hisbah. We’re monitoring this case which was reported at NPF Farm Center Division.

“Kano State under Governor Ganduje has constituted itself into the most religiously intolerant, aggressive and malicious state in Nigeria.

“In conclusion, we note the passing of great human rights icon and activist, Bishop Desmond Tutu of South Africa. A servant of the most high has gone to his reward. He used his faith as a tool for freedom and liberation unlike in Kano State where religion is misused as a tool for enslavement, coercion and oppression. We can do better.

“Nigeria’s clerics, Christian and Muslim, should learn from Desmond Tutu and advocate for victims and not terrorists, for the oppressed and not the oppressor.

“God has not Told me Who will be the next President of Nigeria.”- Pastor Adeboye

Solomon Buchi Narrates how How Abuja Police Officers Kidnapped him, Extorted 500k And Accused him Of Being An IPOB Member.