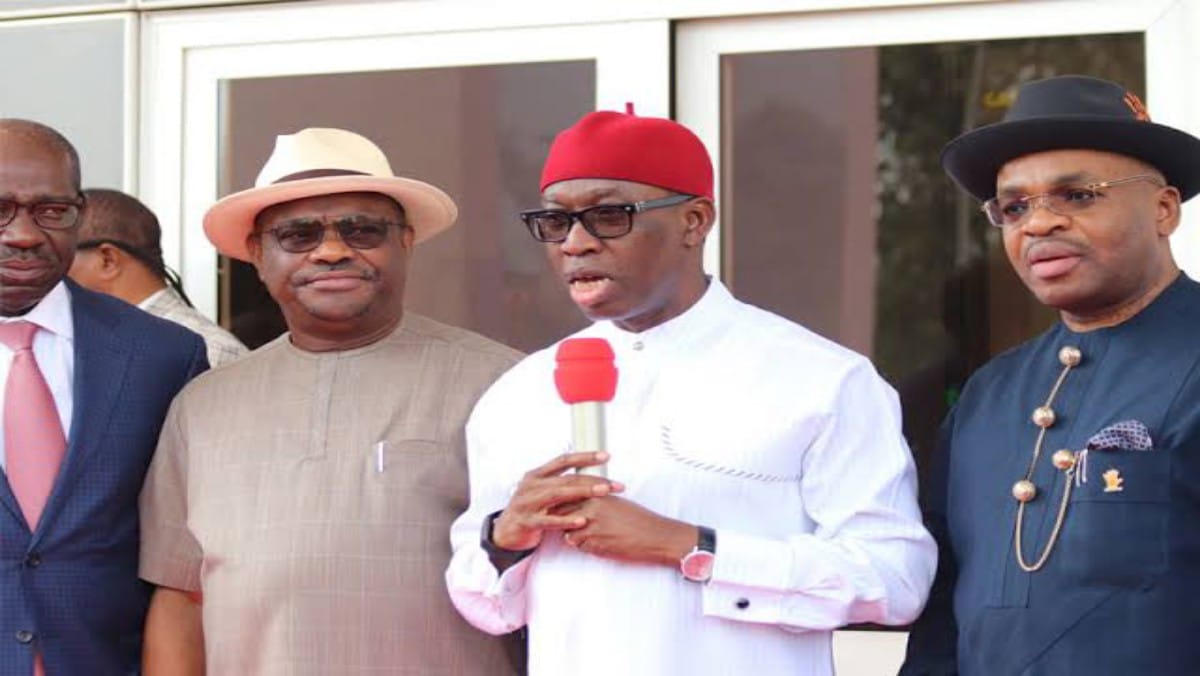 South-South governors have disagreed with President Muhammadu Buhari over his comments that there is nothing to restructure in Nigeria.

According to the governors, Nigeria’s federalism, security architecture, and  revenue sharing formula, among others, need to be restructured to save the country, rather dismembering it.

President Buhari, who was represented  as special guest of honour by Executive Secretary of the Revenue Mobilisation, Allocation and fiscal Commission, RMAFC, Alhaji Mohammed Bello Shehu, at the launch of the Kudirat Abiola Sabon Gari Peace Foundation, in Zaria, Kaduna State, said advocates of restructuring, secession are dangerous and naïve.

Noting that his government had no time for “any obscure conference” to discuss the way forward for the country, Buhari said there is nothing to restructure other than getting the states to allow the local councils function and make the judiciary independent.

President Buhari added that some of those agitating for restructuring are not informed, do not understand what they want restructured and may not have read the 1999 Constitution.

Reacting to the President’s position, chairman of South-South Governors Forum, Dr Ifeanyi Okowa, who spoke through his Chief Press Secretary, Mr Olisa Ifeajika, said: “I don’t know who is not informed here. Restructuring is not about dividing the country into regions as it were.

“Restructuring is a lot of things; true federalism. We can’t be a federation with the way things are; and with so much powers at the centre and the centre does less than even local government areas.“That is why people are calling for restructuring to whittle down the power at the centre and give more powers to the states because they do more work.
“Restructuring includes security. If the federal security apparatus cannot cope with the security challenges and you allow states to have their police outfits, up to community policing, it is also restructuring.
“Restructuring includes good allocation formula from the federation account so that there will be equity. May be they are just thinking that restructuring means dividing the country, creating states. No, that is not all.“In a federation, the federating states should have an entitlement. You are producing oil, oil royalty should go to you as much as it is going to the centre; that is what the people are talking about.“Restructuring is all-encompassing. The Federal Government has not even done one aspect of it. So they don’t know what they are talking about.

The 17 Governors of the Southern states have come together and talked about restructuring, they are not just joking.“They know what they are talking about; they are very involved and other people have started talking about it. Alhaji Atiku Abubakar brought it to the front-burner about five, six years ago.“Atiku Abubakar could not have been uninformed and every other person talking about it.

Professor Wole Soyinka, two weeks ago, said if the country did not decentralise, it would disintegrate.“So I do not know which Nigerian will talk about restructuring now that will make meaning other than what prominent persons have spoken about.

Very many Nigerians have talked about it even those in diaspora and that is what restructuring is all about, going back to the basics and doing the needful.”