Lamboginny ; "From Mud House 2 Modern House"- The Story of an Amazing Rapper.
Advertisement 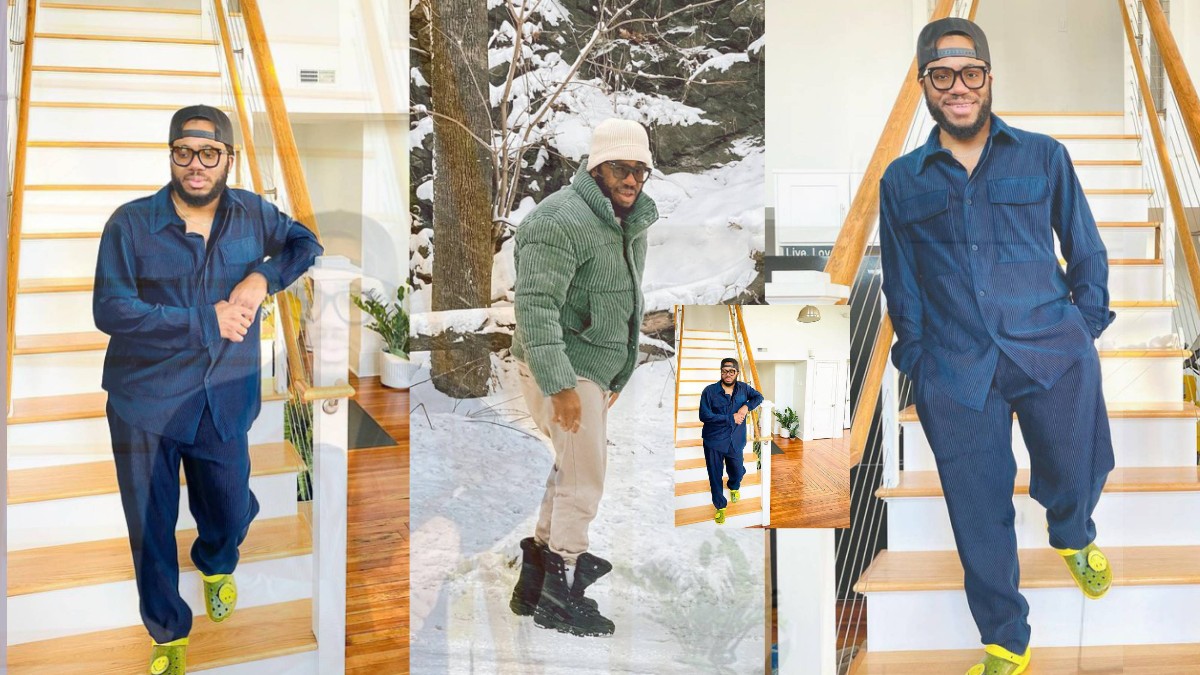 Yinka Lawanson also known as Lamboginny, a rapper, has shared his grass to grace story on Instagram.

The Nigerian rapper, who now lives in the United States with his American wife, recalled growing up in a mud house and later moving to the “face me, face you” one-room apartment with shared bathrooms.

He said he squatted with friends for seven years after leaving his family home and had to walk to the studio many times because he couldn’t afford transportation.

Today, he and his wife live in a comfortable home in the United States, and their family videos receive a lot of attention when they are shared online.

He posted a photo of himself in his current residence and thanked God for bringing him this far.

In an earlier post, the US based rapper shared a photo he said he took ten years ago. See how he described his life 10 years ago.

Lamboginny is a Nigerian Afro-Dancehall musician, youtuber, and humanitarian who goes by the stage name Yinka Lawanson. Lamboginny is a co-founder of the Say No To Crime movement and a supporter of S.A.L.T (Saving All Lives Together), a prison reform program aligned with the United Nations’ 2030 Agenda for Sustainable Development Goals, which was released in September 2015.

Yinka Lawanson AKA Lamboginny was born on the 22nd December, 1984 in Lagos, Nigeria.

Lamboginny appears to be rich both in finance and in influence.

Details of his financial wealth hasn’t been completely made known to the public. But we know that he has a big house in America. He shared picture of him and his wife unboxing favourites electronic gadgets in his American house recently.

Lambogini has severely demonstrated that he has a deep wealth of influence. Apart from being an ambassador of the Nigeria Drug Law Enforcement agency, he has also gone ahead to strike some partnership with the prisons services in America and in the United kingdom.

In 2022, he announced that he has now gotten the opportunity to introduce his music therapy initiative in US and UK.

“I am not a criminal,” an inmate approached him after one of his prison shows. Lamboginny couldn’t get the voice out of his head, so he searched up the inmate’s information.

He discovered that the man was imprisoned for a minor offense such as loitering and was unable to pay the required fine to be released.

Lamboginny planned his release and began assisting others who had been imprisoned for minor offenses. Lamboginny has performed over a dozen jail concerts and arranged the release of over 120 young Africans to date.Thats how influential he is.

He strives to reintegrate released inmates into society, find them jobs, and provide vocational seminars to juvenile criminals still in prison with cash raised from his performances and album sales.

Lamboginny’s hit songs include “Say No To Crime” with Nigeria All Stars, “Gbaladun” with Olamide, and “I Believe in Africa.” SALT, his most recent album, has received rave reviews and is accessible on a variety of streaming providers. YouTube has a lot of concert footage and music videos.

Lamboginny is married to Taccara Rae, who before their marriage had been his girlfriend. Their wedding took place in the United States on the 4th of January, 2019.

According to an account by legit.ng, their wedding was said to be filled with nostalgia. Lamboginny’s fiancee was the first to walk down the aisle. She was now his wife.

Their wedding, which took place in the United States, was filled with nostalgia. Lamboginny, whose real name is Yinka Lawanson, wore a black and white outfit with suspenders on his trousers.

His blogger wife, Taccara Rae, wore a short white dress that was both simple and elegant. Then, in the style of the early 1990s, she wrapped herself in a white fur muffler.

His music carrier kicked off after his StarQuest performance in 2002, a Nigerian reality competition sponsored by Nigerian Breweries.

Lamboginny placed fourth in StarQuest,With his wife Taccara Rae, he is one half of the tiktok duo Ling and Lamb (aka Ling).

On the 12th of October 2017, he celebrated the release of SALT with a concert at the Kirikiri Maximum Security Prison in Lagos. Do2tun introduced him on stage, and DJ Jimmy Jatt, Small Doctor, Mz Kiss, Ozzybosco, and Muna all performed.

He was in attendance and performed at LoudNProud’s 6th Anniversary Party on January 26, 2017, alongside Shina Peller, Dammy Krane, PSquare, and MAKA.

Lamboginny performed the COPA Lagos theme song at the 2014 edition of COPA Lagos beach ball tournament, which took place from December 12 to 14, 2014 at the Eko Atlantic City.

On September 21, 2020, he was featured on the “Hip Hop 4 Peace” playlist, a livestreaming broadcast curated by Universal Hip Hop Museum to commemorate the 75th anniversary of the International Day of Peace on YouTube.

He released his second debut album, “Food Is Ready,” on September 10, 2021, through Lamboginny Music, which featured DAP The Contract, Ling, and Tony Mix. “Move,” “Highest Vibration,” and “Sak Pase (Remix)” are the album’s lead singles, all of which feature TonyMix. See details here

Lamboginny who placed fourth in StarQuest,With his wife Taccara Rae, debuted the first episode of Keep it Reel with Ling and Lamb with Taccara Rae on Apple Podcasts on July 27, 2021.

The duo received their first YouTube Plaques for 100k subscribers in May 2021.

Other personal works of Lamboginny.

In 2009, he founded the Say No To Crime Project and held his first anti-crime campaign concert in Lagos’ Kirikiri Maximum Security Prison, which drew the attention of Olushola Ogundipe, the former Controller General of the Nigerian Prisons Service.

Following his meeting with him in 2010, Lamboginny was appointed as the Nigerian Prisons Service’s anti-crime ambassador.

He was appointed an officer in the Nigerian Prisons Service on December 6, 2010. On January 7, 2011, he began the Season in Prison project, a female prison concert series. Onyeka Onwenu, Shan George, Stella Damasus, Chidinma, Aydotcom, Sexy Steel, Dekunle Fuji, Jedi, DJ Rowland, and Jafextra are among the performers.

He had a VIP “Valentine in Prison” concert on February 14, 2011. Midnight Crew, Denrele Edun, Tim Godfrey, AK1, Dele Momodu, Stella Damasus, and Shan George made surprise appearances. He was appointed ambassadors of the National Drug Law Enforcement Agency on December 11, 2012.

Barack Obama, the 44th president of the United States, invited him to speak at the Young African Leaders Initiative in 2016. He was invited to speak at Leicester Prison in the United Kingdom in 2017. At the 68th United Nations Civil Society Conference in 2019, he spoke about the 40 thousand prisoners awaiting trial at the Kirikiri Maximum Security Prison.