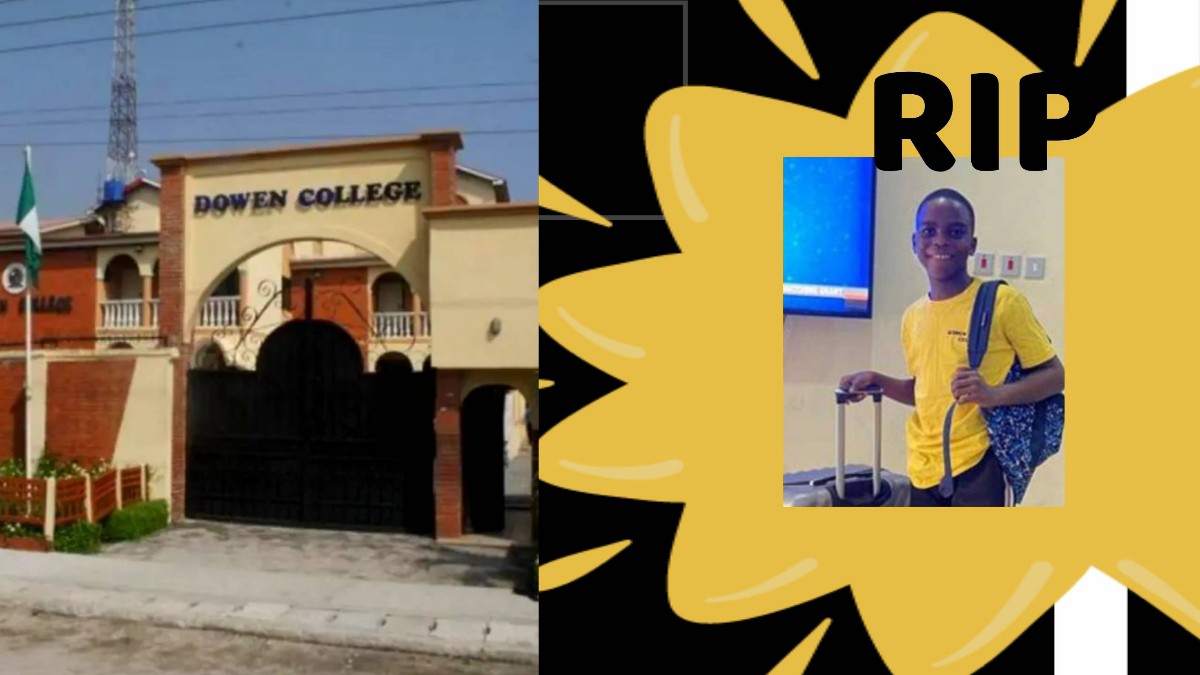 Sylvester Oromoni was a student of Dowen College until his death located in Lekki area of Lagos State. He was said to have been allegedly murdered by some cult groups in the school.

Sylvester Oromoni was said to have been assaulted by some cult groups, whom he identified as college students prior to his death, for refusing to join the fraternity.

Following the attack, he was admitted to a Lagos hospital on Friday and was pronounced dead on Tuesday.

Perrison Oromoni, a relative of the deceased, announced his death on the microblogging site Twitter on Wednesday.

He revealed that the 12-year-old died on Tuesday 30th may 2021, after a series of tests and X-rays revealed that he suffered internal injuries as a result of a severe beating.

The father of Sylvester Oromoni, a stated that his son lived in fear.

Since then, the hashtag #JusticeForSylvester has been trending on social media, with claims that efforts were being made to “kill” the incident.

Sylvester Oromoni was not beaten to death ― Dowen College.

Following the death of a 12-year-old Dowen College student in a controversial circumstance, the school’s administration has refuted claims that the deceased was beaten to death.

Dowen College stated in a statement made available to News men and reported by the Vanguard Newspaper that he was injured while playing football on November 21, 2021 and was immediately administered first aid before being released to his hostel room after expressing relief.

Their statement read in part: “It came as no small shock to us to read wild social media tales that he was beaten by some students and that he specifically mentioned some names.

“We immediately commenced investigations and invited the students allegedly mentioned for interview.

“His guardian was also present during the interviews, which revealed that nothing of such happened.”

“The whole incident was strange and unbelievable because: The school has effective anti-bullying policies and consequences are well spelled out to all the students.

“The preliminary investigation showed that there was no fighting, bullying, or any form of attack on the boy.

“He made no such reports, neither to his sister who is also a student or any other students, prefects, house parents, medical staff, or any of the management staff.

Sylvester Oromoni’s father has revealed his final words before passing away.According to his father, the late Dowen student did not play football prior to his death.This contradicted the school’s earlier claim that Oromoni died as a result of an injury sustained during a football game.

According to Sylvester’s father, prior to his death, his son revealed that he did not play football in school and did not trip and fall.Junior “opened up” on November 29, when his father was away for a government function, according to his father.

In his father’s words; “Junior said, ‘mummy, I didn’t play ball; I didn’t fall.’ He jumped off his hostel bed. They kicked him, matched his waist. Other students ran off. They threatened to kill them all if they spoke a word to the school staff.”

“They warned Junior to say he sustained injuries while playing ball. They threatened him. If you ask the roommate, they’d all lie. They matched his ribs and waist. All that pain for a 12-year-old.”

Meanwhile the boy’s family has released videos and a photo to demonstrate that his death was caused by more than just a hip injury.

A photo shows Sylvester with bruised lips, which the family claims he got after being forced to consume a substance by the boys at school.

In another short clip shared online, Perrier stated that Sylvester was in so much pain that he couldn’t raise his leg.

Sylvester Oromoni: “I Would Have Burnt Down The School By Now If I’m The Mother ” Olaitan.

Adeyemi Olaitan, Alaafin of Oyo’s estranged wife, has reacted to the tragic death of Sylvester Oromoni, a Dowen College student.

If she had been Sylvester Oromoni’s mother, Olaitan claims she would have burned down Dowen College.

This was stated by the mother of three on Friday, as celebrities called for an investigation into the death of a 12-year-old student who died after allegedly being tortured by classmates for refusing to join a cult.

“If I’m the mother, I would have burn down the school by now by myself o. I don’t play with my kids. Like why on earth will you do that to an innocent boy?” she added.