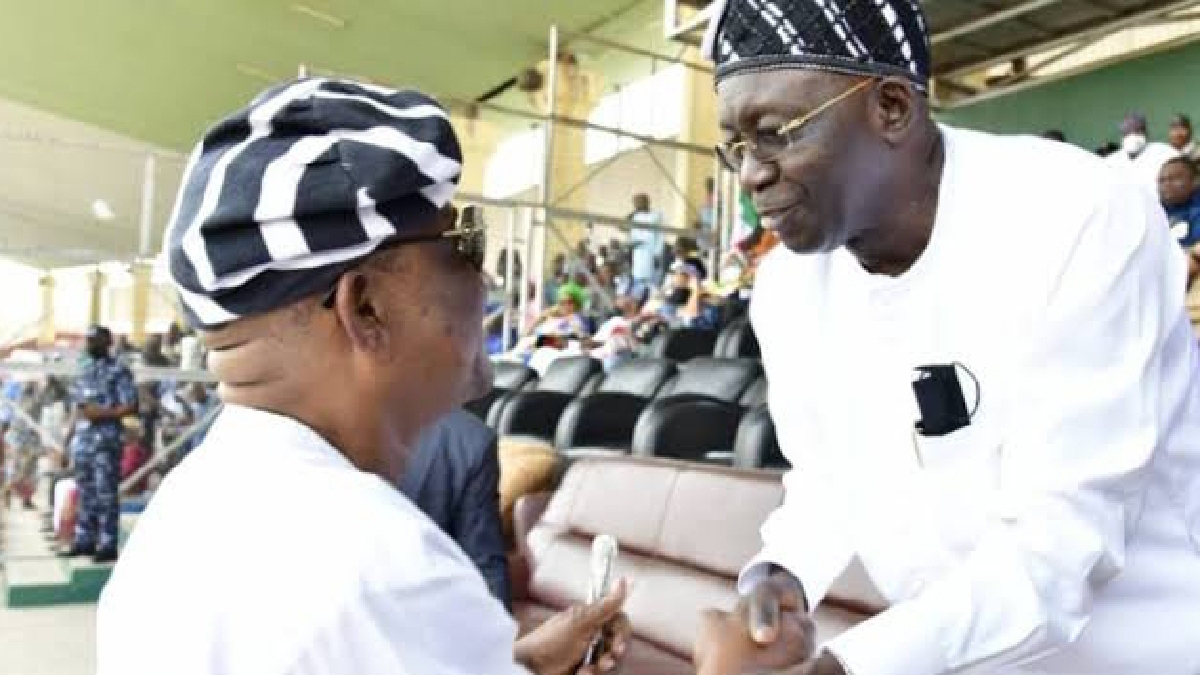 Rivers State Governor, Nyesom Ezenwo Wike has admonish the National Chairman of the Peoples Democratic Party, PDP, Dr. Iyorchia Ayu to bring his wealth of experience to rescue Nigeria from the shackle of All Progressives Congress, APC bad governance.

He has also urged him to ensure that he reconciles aggrieved members who had left the PDP, with a view to bringing them back to the party as they have no opportunity in the APC.

See also THOSE PLOTTING DOWNFALL OF MY GOVERNMENT WILL FAIL – WIKE

Governor Wike gave the advice at the Interdenominational Thanksgiving Church Service and reception organized by the Benue State Government in conjunction with the Christian Association of Nigeria, CAN, Benue State Chapter for the PDP national chairman, Dr. Iyorchia Ayu at the Aper Aku Stadium, Makurdi on Sunday.

The Governor noted that Ayu has vast experiences of the country having occupied various political positions. He however reminded him of the enormous task ahead to rescue Nigeria from the evil hand of the ruling APC led federal government in 2023.

“Today is not a day to talk about APC. Today is the day to join the people of Benue State in thanking God for his mercies. Today is a day we shall be able to tell our National Chairman plainly what the People Democratic Party, PDP expect from him and how we’re going to stand by him to make sure this party is rebuilt, in order to put themselves together and to take over power in 2023.

“It is not going to be easy for you. The time for work has come and that is when we will know the experiences you have gathered, how you want to put it to use and rebuild the People’s Democratic Party. It is very, very important.

“We want you to use your experiences as people have said to make sure even those who have left the party, should be brought back to the party.”

The Governor enjoined the National Chairman not to be distracted on the political ambition of party members, but rather focus on rebuilding PDP into a formidable party.

“Let me also tell you Mr. Chairman, do not be distracted about who will be presidential aspirant, let them not disturb you. Go, focus and rebuild the party. When once the party is rebuilt, I can assure you, you have somebody that will stand in this party, and Nigerians will vote for that person. What is important for you now is to see what you can do. Be focused ,let nobody distract you.

Governor Wike urged the chairman not listen to those who will come and tell him that governors want to hijack the party. According to him, those who adopted the tactics in the past did so to divide and rule the party.

” I want to plead with you, let people not tell you to begin to go to one governor’s place or the other, in order for the Governors Forum to be divided. At the end of the day, the party will suffer. Your business is, if the governors are not united, unite the governors, so that they can work for interest of the party. It is very key.”

He observed the lost of confidence by Nigerians on members of the National Assembly and urged Dr. Ayu to ensure that PDP members henceforth form a formidable team, speak with one voice as they were in time past.

“Today we have lost focus in the National Assembly, and so you have to put our party together to make sure our members of National Assembly speak with one voice and be opposition party they’re supposed to be.”

“IF you’re not doing well, Mr. Chairman, I will shout”- Wike to PDP Chairman.

Speaking further, Governor Wike stated categorically that despite the fact that he supported and voted the National Chairman, he will not hesitate to speak out when he is deviating from doing that which the party expect him to do.

“Yes, I supported you, I voted for you because I have the belief you can turn PDP to success in 2023. But if you’re not doing well, Mr. Chairman, I will shout, I will say Mr. Chairman this is not what we expected from you.”

Governor Wike expressed happiness over the successful election that ushered in a new leadership of the party and assured the National Chairman of his commitment, with other governor’s of the party to ensure that he succeed in his bid to rescue Nigeria.

” I’m one of the happiest person today that a new leadership has emerged. I am very, very happy, because I know that if we did not do this, this party would have collapsed. I’m very, very happy. And so most of you who refuse to listen that time, you have now realised that yes, changing leadership is the key for this party to win in 2023.”

In his homily titled” Leadership Predicated on God for Service and Accountability to the People”, the Bishop, Catholic Diocese of Makurdi, Most Reverend Wilfred Anagbe stressed the importance of thanksgiving to God in all circumstances.

He urged Dr. Iyorchia Ayu to always remain humble and magnanimous in victory as exemplified in his character as an academics.

Bishop Anagbe noted that the victory of Dr. Ayu is for the PDP and an invitation to serve Nigerians again. He urged him not to be a dictator, but work collectively with members of the party to achieve set goals.

Highpoint of the programme was the presentation of a Holy Bible to Governor Wike by Rev. Akpen Leva, Chairman of Christian Association of Nigeria, CAN, Benue State.

Other Governors that attended the programme include Senator Ifeanyi Okowa of Delta State, Ifeanyi Ugwuanyi of Enugu State and the host Governor, Samuel Ortom.