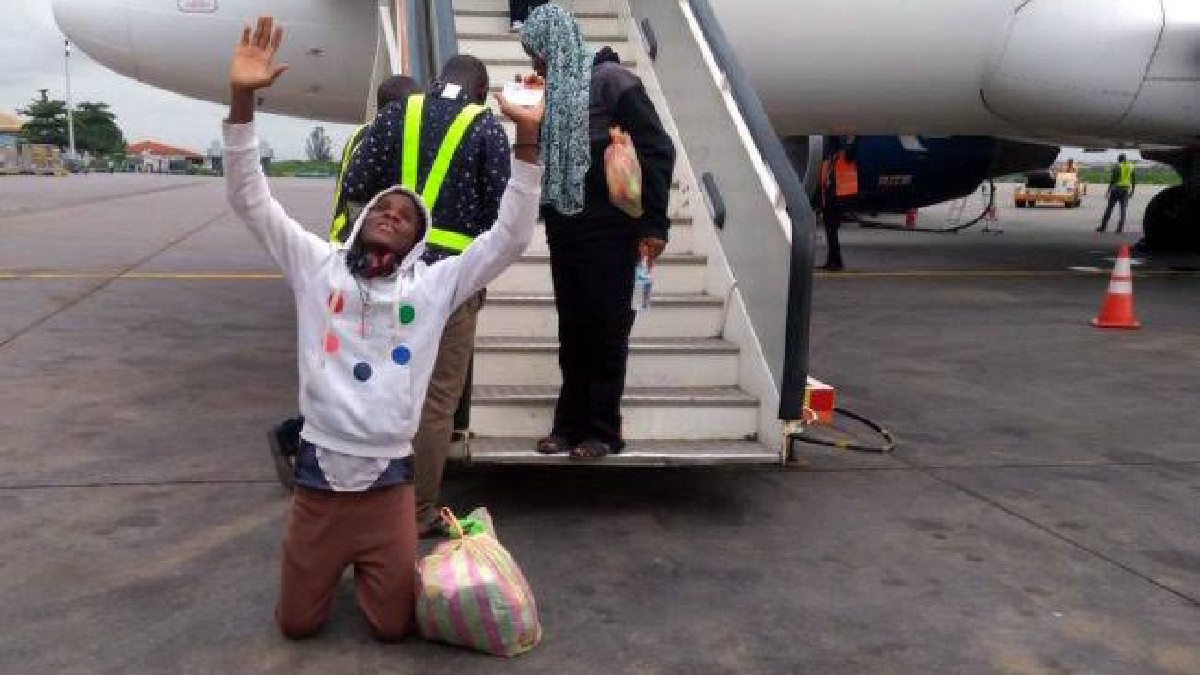 Many Nigerians who managed to flee Russia’s ongoing military offensive in Ukraine arrived in Abuja, the country’s capital, on Friday, recounting their escape from the intense bombings and missiles fired by Russia’s military forces.

Millions of foreign nationals have fled Ukraine for neighboring countries as a result of the war, which has killed hundreds of civilians and troops, injured thousands, and displaced many more.

See Also “How many of you have sent your private jets to evacuate Nigerians from Ukraine?” Ben Bruce tackles rich Nigerian Billionaires .

They were all received at the Nnamdi Azikiwe International Airport, Abuja. One more batch was being expected from Hungary and Poland as of the time of filing this report.

Some of the returnees who fled Ukraine to Romania told reporters how they managed to avoid the invasion.

Despite diplomatic appeals and heavy sanctions imposed by other countries, the European Union, and other allies, Russian forces have continued to launch bombs and missiles into various parts of Ukraine, Europe’s second largest city.

Apart from racial discrimination, Anuoluwakintan Olawoye, a medical student at the University of Ternopil, said she starved, trekked, and stood for long periods of time.

She stated that the reports of the invasion and bombs going off in various parts of the country were enough to make anyone fearful, but she was grateful she was able to flee.

She said, “I do not wish my enemy what I went through, even though mine was not as bad as others’. There was a curfew, we starved because there was nothing to buy, no store opened and sirens blared every time! No taxis to move from one place to another. We had to trek for hours. The city was becoming vacant. We couldn’t sleep knowing that the country was at war.

“On Thursday morning, there was a bombing in Kyiv but thankfully I was in Ternopil so I escaped. Again on Friday, some parts of Lviv were bombed; Lviv is two hours journey away from Ternopil.”

Olawoye said she made for the Romanian border after trekking for hours but on getting there, she found that preference was given to Ukrainian citizens.

She added, “We got to the border around 4 pm and we were told to wait. We waited till 8 pm and they didn’t allow us (blacks) to go inside. We attempted to make a move when they called on women and children and they turned us back. They only allowed their citizens to go. It was two hours after they left that they said they would come back to us.

“We pleaded with the officers that the snow was much outside, I was shivering as a result but they did nothing. I crossed about 2 am and it was by luck. Some were not that lucky.

The racism that I encountered at the Ukrainian border was not for the weak. They were pushing us aside just to allow their trucks to move. They shouted at us, pushed us and did all sorts.”

She said, “I trekked for three hours non-stop. I had friends who trekked for more hours. You just had to forget you have legs while you keep going.

“The thought of you keeping yourself alive would keep you going. Some people fainted along the road. The stronger ones among us had to give them support. I never thought I would have to experience something like this.”

2023;”How Insecurity Could challenge Elections.”- CAN