CNG Berates SGF for Demanding that Power Shifts to The South in 2023.
Advertisement 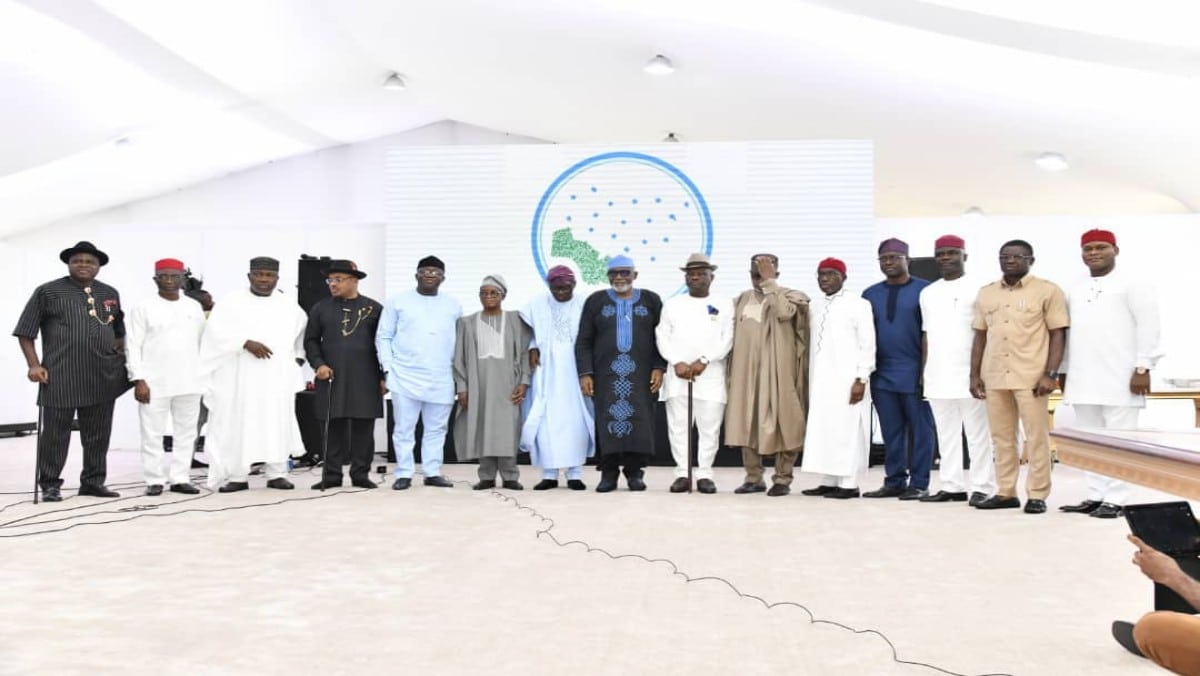 The Coalition of Northern Groups, CNG, has criticized the Southern Governors’ Forum for demanding that the 2023 presidency be zoned to the South.

Recall that the Southern governors’ forum had taken a position on raging national issues.

Rising from a meeting attended by 15 of the 17 state governments in the South on Monday, the governors, among others, insisted on power shift to the South in 2023, and rejected removal of electronic transmission of results from the Electoral Act Amendment Bill.

They also agreed to commence open grazing ban on September 1, and also they opposed three per cent share of oil revenue for host communities and 30 per cent share of profit for the exploration of oil and gas in the frontier basins in the Petroleum Industry Bill, PIB, just passed into law.

The governors got the backing of southern members of the House of Representatives, Afenifere, Middle Belt Forum, MBF and PANDEF.

However, the CNG said southern governors could not stampede the North to get the Presidency.

CNG, in a statement by its spokesperson, Abdul-Azeez Suleiman, accused the Southern governors of ganging up against the North.

Describing the proposed anti-open grazing law as retrogressive, the group said it threatens the legitimate presence of pastoral communities in the South.

CNG said: “Their (Southern governors) support for treasonable felony, by the subtle endorsement of the activities of such criminal separatist forces, led by the likes of Sunday Igboho and Nnamdi Kanu, by warning the nation’s security agencies against operating in the region without obtaining permission from the governor of the particular state is a matter that must be given the seriousness it deserves.

“It is ironic for such leaders of a society that delights in unleashing mayhem against fellow citizens of other regions at the slightest of pretexts, to expect the other sections of the country to trust them or any of their proteges with presidential powers.

“The Southern governors’ resolutions in that regard have further exposed a deliberate attempt to impose a contentious system of a rotational presidency that turns all democratic norms and accepted indices of our national demography on their heads; a rotation system that is clearly aimed at achieving dubious political goals; and one clearly designed to weaken the North.

“The Southern governors’ threat to impose and enforce this undemocratic leadership selection process on the North, irrespective of its advantage of numerical superiority and inherent political sophistry, is part of a calculated design to continuously weaken our region politically and pauperise it economically.

“This conspiracy is actively perpetrated with the connivance of some northerners and accommodated by the personal ambition of a few of those that present themselves as northern political leaders.“Inevitably, the immediate trigger to the Lagos pronouncements was the collaborative assurances by the former Borno State Governor, Kashim Shettima and the Kaduna State Governor Nasir Elrufai given just two days earlier.”

CNG insisted that the North would not be stampeded into making major decisions around power shift.

It added that only a candidate who is competent and can unite and secure Nigeria should be President in 2023, irrespective of where he or she comes from.

“We warn the Southern governors and their northern collaborators that any attempt to ride on the back of such gratuitous insults to democratic fair play and crass political opportunism, to hoist incompetent leadership on the nation in the name of rotation would not be accepted and shall be vehemently resisted,” CNG added.

Also, the Immediate past Secretary-General of the Arewa Consultative Forum, ACF, Mr. Anthony Sani, picked holes in the positions canvassed by southern governors.

Sani told Vanguard that electronic voting or transmission of result has never been a part of the nation’s electoral process.

According to the Vanguard, He said: “I wish to point out that electronic voting process was never part of the Electoral Act of 2010 as amended; even the card reader has never been part of the Act.

“That was why Atiku Abubakar’s reliance on the central server in the nation’s electoral process was rejected by the presidential tribunal and the Supreme Court. So, the rejection of removal of electronic transmission cannot arise.

“That is to say removal from where? The Southern governors have therefore missed the mark in the struggles to include electronic voting and transmission in our electoral system.”

On the ban on open grazing by the governors, Sani said the move would have been applauded if the governors offered the herders credible alternatives apart from the ranching they are canvassing, saying: “I do not see how outright ban on open grazing backed by the state laws without provision for any viable alternative for the herders who lack the wherewithal can be implementable.

“To me, such a fiat approach can be likened to outright banning of subsistence farming of using hoes and cutlasses without any viable alternative for modern farming. Any law that is not implementable is as good as of no effect and of no use to the society,” he added.